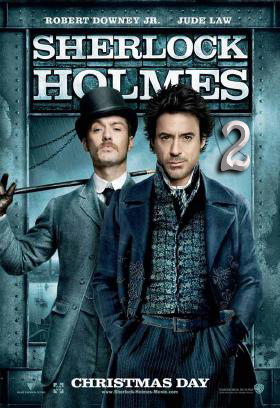 I'm not a frequent movie patron so if I make the effort to brave the crowds and overpriced candy, you know a movie has caught my eye.
Having seen both the Sherlock movies and the BBC series, starring Benedict Cumberbatch and Martin Freeman, I have concluded that I am most definitely a Watson fan. I think Sherlock is an interesting character but Watson's stability appeals more to me.
Sherlock Holmes 2 - A Game of Shadows lives up to its previous film for me, except that I deduced the conclusion thirty minutes before it ended. Sherlock is still the manic genius with a handy gift of foresight and martial art skills. Watson is just as level headed and discipline in his approach to all things. This time, we are finally introduced to Sherlock's antagonist, Professor Moriarty, played by Jared Harris. Harris's portrayal of Moriarty, as a sophisticated and intelligent villain, is well done. Chess is used as a metaphor for the ongoing conflict between Holmes and Moriarty, which fits for their type of relationship. They are both strategists and attempt to play as gentleman. I really liked the period costumes and the location shots are visually appealing. I found myself more enthralled with those than the slow motion action sequences. Don't worry, the movie has plenty of those, if you enjoy them.
If you are looking for 128 minutes of good fun, then this sequel is right up your alley. Just be careful you don't run into any unsavory characters while taking that stroll.
Posted by Anonymous at 4:18 PM