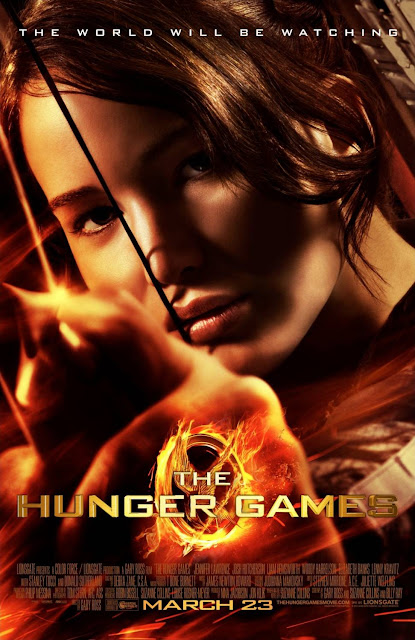 The Hunger Games – A Movie Review by Marie A Parsons (MantoniaP)

In an indeterminate future time, twelve outlying districts pay a horrible penalty. At least seventy-four years before the movie opens, these districts rebelled against the central Capitol, and failed. In an annual reminder of this treasonous act, and to teach the lesson that such rebellion would never again be tolerated, each district holds a lottery. One young man and one young woman are chosen from each district’s best and brightest age-range of 12-18 year-olds. These twenty-four young people serve as tribute, representing their district in a gladiatorial “to-the-death” exhibition. Welcome to the 74th edition of The Hunger Games. 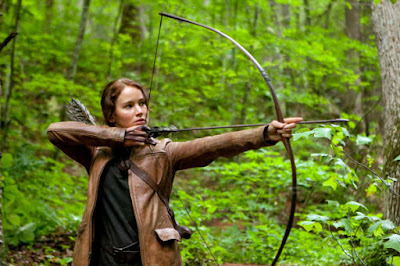 Eighteen-year old Katniss Everdeen is one of the two tributes from District 12. While viewers are shown life in just this one of the twelve districts, it might be supposed that no district lives well. Conversely, life in the Capitol is affluent, almost hedonistic and decadent. The people are well-groomed and manicured. Often dressed in bright colors and oddly dyed coiffures -Stanley Tucci’s deep blue ponytail is quite a touch-they all seem like strangely exotic birds.

Katniss’ 12 year-old sister Primrose had actually been chosen in the tribute lottery, but Katniss, a proficient archer and hunter, confident in the wilderness, volunteers to take her sister’s place. She is paired with a boy named Peeta Mellark, who had once shown Katniss a kindness, giving her bread rejected from his mother’s bakery. They both join the other 22 tributes on a train-ride to the Capitol, where they are paraded in triumph, richly fed, trained, and told that some tributes die of infection, some of dehydration—not all tributes kill each other during the Hunger Games. They are then evaluated and then sent out into a virtual territory, where they are each expected to do their best to survive-and yes, since there can only be one victor, they may even have to kill each other. Lives are lost within the first hour that the Games begin. 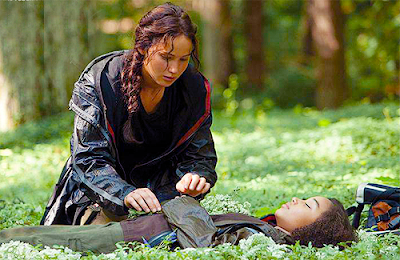 Fighting to the death lies at the core of this strangely gripping dystopic tale. A few days before viewing this movie, a TV news soundbyte asked “Is “The Hunger Games” story too violent for teenagers, and what message might it send to young people?” One message, if there is a message in this well-crafted fictional tale of a possible future time, is that our young people too often pay the price for the society their adults create. Another message might be, how can our young people be expected to behave well, with kindness and compassion, when the adults around them when the adults around them demonstrate hateful, destructive behavior--even if only of the verbal variety. Violence of words is at damaging as a blow with a rock, a bullet from a gun, or a bomb exploding.  In actual fact, many of the young people, especially the youngest in the group of twenty-four, act with kindness and conscience, helping other tributes. It is one of the oldest tributes, who seems already tending toward meanness when first appearing, who is the arena “villain.”


Woody Harrelson plays a touchingly poignant role as a past victor from Katniss’ district, who now mentors the pair. Donald Sutherland plays the President, and he may be the true villain, if any one character might be singled out. In truth, that entire society might be indicted for allowing The Hunger Games continue for three-quarters of a century. But as the driving force, Donald Sutherland’s President might be the controlling force. In his own words, “hope can be a spark. Too much hope is dangerous.”

Katniss and Peeta might provide hope, both the spark and the danger. The Hunger Games as a movie is an intriguing entertainment. Its view of a possible future is not so unbelievable—and that is a saddening thought. Adults want to protect the young people, those who will inherit the world. Yet not only do 18 years olds join the military, but at every single age, from the moment they understand that people around them communicate, our young people listen, absorb, and shape their own visions of what is appropriate, from the examples we set. Even when we are so sure they are not watching.


Welcome to The Hunger Games. May we never send our children into such terrible odds.
Posted by DR5WHO at 6:10 PM