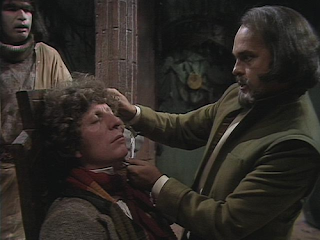 Long time character actor and multi classic Dr Who appearances as some of the more memorable villains in the series died on Monday.  He is best known as playing Solon in the Brain of Morbius and The Warlord in The War Games.  He was also in The Power of Kroll and The Krotons plus he made an appearance as Brockley in the Peter Cushing Doctor Who movie The Dalek Invasion of Earth 2150 AD.  He also had roles in cult favorites The Avengers, Z- Cars, The Saint, UFO, and Space 1999.  Philip Madoc was 77 years old.

Email ThisBlogThis!Share to TwitterShare to FacebookShare to Pinterest
Labels: doctor who, Philip Madoc