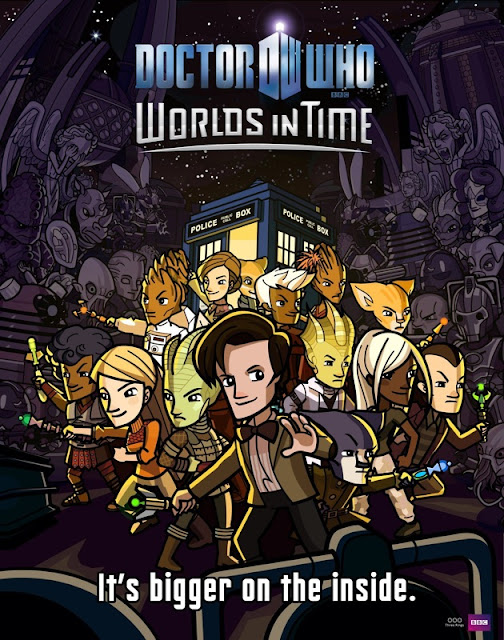 The Doctor Who multi player online game has officially launched today (Monday March 12, 2012)  This is a pretty cool concept and you get to be the Doctor and explore all different types of different worlds.   But don't take my word for it read the official press release that was emailed to all the Dr Who fan pages today. You can start playing the game by following the link. http://www.doctorwhowit.com/


BBC Worldwide Transports Doctor Who: Worlds in Time Into Commercial Launch
Casual Multiplayer Online Game Proves It’s “Bigger on the Inside”
Los Angeles, Calif (March 12, 2012) – BBC Worldwide Digital Entertainment and Games today announced the official launch of Doctor Who: Worlds in Time (DoctorWhoWIT.com), the first-ever browser-based, free-to-play multiplayer online game based on the popular television series. Created in partnership with Three Rings, the award-winning developer of persistent online worlds Puzzle Pirates and Spiral Knights, the game transports fans and gamers alike on a journey throughout the boundless Doctor Who universe.
Doctor Who: Worlds in Time offers something for everyone, including an intriguing narrative for sci-fi followers and serious gamers and stimulating micro-missions for game enthusiasts looking for a quick pick-up-and-play game. After meeting the Doctor in the iconic TARDIS, players travel to various immersive worlds (including Ember, Mars and New New York) and work together to defend civilization against infamous villains (including the Autons, Clockwork Robots and Zygons) bent on creating chaos and destruction in the universe. Since the open preview launch in December 2011, the BBC and Three Rings have worked to make more Doctor Who environments available, as well as introduce additional virtual items and create deeply engaging communal features.

“Worlds in Time offers players a multitude of elements and opportunities to socialize,” said Robert Nashak, executive vice president, BBC Worldwide Digital Entertainment and Games. “From introducing beloved characters and progressive storylines to presenting additional guild play, our goal is to become the largest Doctor Who community ever assembled, while also being an enjoyable experience for all users.”
While Doctor Who: Worlds in Time is free-to-play, players can enrich their gameplay and hasten their progress through the purchase of Chronons, which help them to customize their avatars, complete mini-games, build new contraptions and more.
“I have been a fan of Doctor Who since I was a child, so developing this game with BBC Worldwide is a dream come true,” said Daniel James, CEO of Three Rings Design, Inc. “Like the Doctor, we have our own mission, to provide Doctor Who fans an experience matched only by the wondrous TV series, and casual gamers a warm opportunity to discover the marvelous world for themselves. It’s exciting to see the Doctor Who universe come to life in such a unique way.”
Doctor Who, one of BBC Worldwide’s flagship brands, is the longest-running science fiction series in the world and will celebrate its 50th anniversary in 2013. It’s the story of the Doctor, the mysterious traveler in time and space, who has saved the universe so many times. The Doctor is a Time Lord, one of a legendary race of powerful beings whose job it is to observe and record, but never interfere. 2011 was the biggest year ever for Doctor Who on BBC AMERICA with record ratings and mass critical acclaim. The series broadcasts in more than 70 million homes and On Demand across all major digital platforms.
BBC Worldwide:
BBC Worldwide Limited is the main commercial arm and a wholly owned subsidiary of the British Broadcasting Corporation (BBC). The company exists to maximize the value of the BBC’s assets for the benefit of the license fee payer and invest in public service programming in return for rights. The company has six core businesses: Channels, Content & Production, Sales & Distribution, Consumer Products, Brands, Consumers & New Ventures and Magazines, with digital ventures incorporated into each business area. In 2010/11, BBC Worldwide generated profits of £160 million on sales of £1158 million and returned £182m to the BBC. For more detailed performance information please see our Annual Review website: www.bbcworldwide.com/annualreview
bbcworldwide.com twitter.com/bbcwpress
About BBC Worldwide Digital Entertainment and Games:
BBC Worldwide Digital Entertainment and Games is a core business within BBC Worldwide, the main commercial arm and wholly-owned subsidiary of British Broadcasting Corporation (BBC). Launched in 2010 and headquartered in Los Angeles and London, the business works with top BBC brands to develop new opportunities across a wide range of gaming platforms. The business is responsible for the company’s first MMO, Doctor Who: Worlds In Time and the multi-year partnership with Top Gear and Forza Motorsport, amongst many others.
Doctor Who: Worlds in Time: DoctorWhoWIT.com
About Three Rings, Design, Inc.
Three Rings is a SEGA game studio dedicated to making innovative and engaging online games that bring joy to a wide audience. The studio was founded in 2001 and launched Puzzle Pirates in 2003. Three Rings is based in San Francisco, with offices in a steampunk submarine. The company also has tentacles in Philadelphia, PA, and Madison, WI. For more information, visit www.threerings.net.
Posted by DR5WHO at 8:42 PM

Email ThisBlogThis!Share to TwitterShare to FacebookShare to Pinterest
Labels: doctor who, Doctor Who: Worlds In Time, Online Game