Doctor Who To Film In New York For Series 7 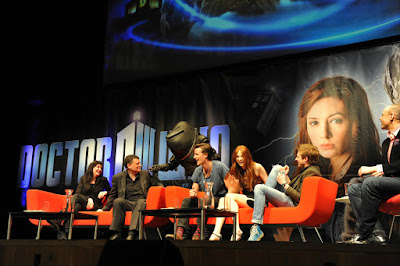 Here is some pretty cool news is that episode 5 of Doctor Who's Series 7 will be filmed in New York.  Episode 5 is, of course, the one where Amy and Rory leave the show while battling the Weeping Angels. This news was announced yesterday by Steven Moffat at the Official Doctor Who Convention.  The news was confirmed by Executive Producer Caroline Skinner at the convention also.  I find this news pretty exciting because I live near New York.

Also those lucky enough to be in attendance at the convention were given a sneak peak at Doctor Who's 7th Series.  That trailer will be available on the BBC Official Doctor Who website at 9am GMT.
Posted by DR5WHO at 8:30 AM

Email ThisBlogThis!Share to TwitterShare to FacebookShare to Pinterest
Labels: doctor who, Doctor Who Filming in New York, Doctor Who Series 7, Weeping Angels