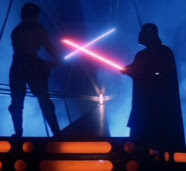 As I have mentioned before, I am amazed on how many sequels are on my top 25 list. Two of those sequels stem from one movie and here is the look at the first sequel. 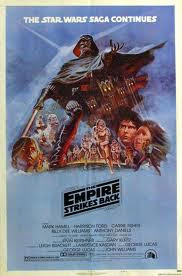 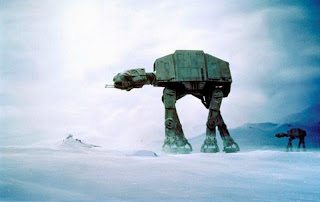 If you have read my earlier ranking of Return of the Jedi then you know some of the back ground reasoning why I ranked the Star Wars films as I did on this list and why the prequels are not in my top 25. The Empire Strikes Back is probably the best film of the original trilogy. It has an excellent story and great action all around. The performances improved greatly and will continue to improve into ROTJ. But A New Hope or as I call it, Star Wars, is a bit higher on my list than TESB.

IMDB Story Summary -
Fleeing the evil Galactic Empire, the Rebels abandon their new base on Hoth. Princess Leia, Han Solo and the droid C-3PO escape in the damaged Millennium Falcon, but are later captured by Darth Vader on Bespin. Meanwhile, Luke Skywalker and the droid R2-D2 follows Obi-Wan Kenobi's posthumous command and receives Jedi training by Yoda on Dagobah. Will Skywalker manage to rescue his friends from the Dark Lord?Written by James Pearce <james.pearce@cs.man.ac.uk>

I was already part of the Star Wars universe and when TESB came out I loved every part of it. It remains a solid movie with plenty of action and plot twists. The movie does have a monster of a cliffhanger and in a way, this kind of makes it an incomplete movie. Not that I was disappointed but audiences were shocked that the story did not conclude. One can say this is more common place today but back then it was rare. I think this incompleteness creates the excellent cliffhanger feel to it and tortured us for years after. 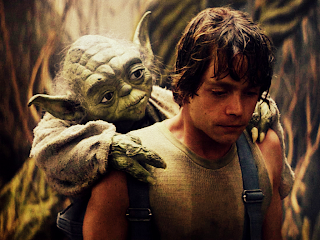 One can say the reason Star Wars and TESB are number 1 & 2 is because ROTJ is the least excellent movie of the three and to a point this is true although ROTJ does have some excellent parts to it. TESB has a little of everything and is exciting throughout. The incredible reveal that Darth is Luke’s father was one of the most outstanding moments in cinema and sadly is ruined if someone watches the prequel first. For the young people who have watched the movies in order – 1, 2, 3, 4,5,6 – you missed out on that moment. For those who viewed them in the order of release, good for you!

TESB is an important movie because it cemented the franchise for good. The first movie was unbelievable but it was important for the sequel to hit it out of the park in order to secure the future. Otherwise we may have never seen the prequel….. well, oops… 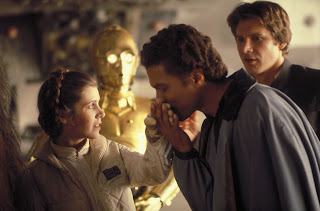 The movie perfectly and logically progresses the story along. Luke learns more about the Force and his path in becoming a Jedi is a tough one. Relationships develop and the Darth Vader turns from being just another bad guy to being Luke’s father. Much more drama is involved. The effects, direction, sets and acting all progress as well and one could argue, hit a high point from the franchise.

I think the highlights of each of the trilogy differ. I believe The Empire Strikes Back probably has the best acting by all the main stars. It is the tightest in terms of editing and is different enough to stand out from the other two. It peels off two separate story lines that contrast one another perfectly. We have the mystical journey of Luke Skywalker in one tale and the running for their lives of the other. The re-union of the characters toward the end punctuates how well these characters feed off one another as demonstrated in the latter part of Star Wars and the early scenes in TESB. 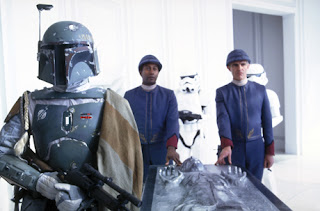 This division of characters gives more focus on the individual characters, allowing Mark Hamill, Harrison Ford and Carrie Fisher to have moments and shine for the audience. Hamill has a harder time as he is playing off of non human characters for the majority of his scenes.

The character of Darth Vader takes a huge step up into the limelight, going from a menacing masked bad guy into someone of vast importance to Luke and the story. It is no longer cut a dry that Vader is just evil and just what is Obi Wan up to not telling the truth? 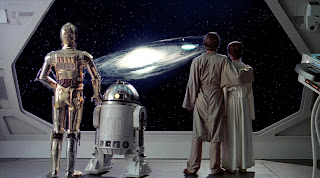 The only reason The Empire Strikes Back is ranked behind Star Wars is because it came second.

When did I first see it?  The summer of 1980
How many times have I seen it?  Probably 35 times in the theater and at home.
I have the DVD