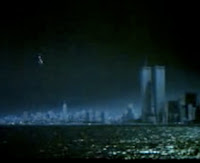 One thing that happens to me when I see movies over and over again – I start to appreciate them more and more. But eventually some movies start to become so embedded in my mind that I forget about them when thinking about my top 25 list, for example. The films are almost a given that they are in my best of the best lists. Four of the next eight films sort of fall into that category of being watched by myself so many times that I have become over exposed to them. Despite this, they are still part of my list and for most of them, are so important to my evolution of Sci Fi movie enjoyment that they reach very high on my list. Often I will watch these films when they are on TV but rarely do I sit down to watch them on disc. You will probably be able to figure out which movies I am talking about by the shear number of times I have watched them.

Just a reminder, I did mention in an earlier review that my estimates of the number of times I watched a movie are based on watching most of the movie (not just 15 minutes here and there) and the limited time within my life time. I have never kept a movie so close as to become obsessed with it that my numbers will reach 100 nor will I exagerate the amount like some people do. I do know people who have watched films many, many times and don't doubt some of these numbers. I do know some people who make it up. 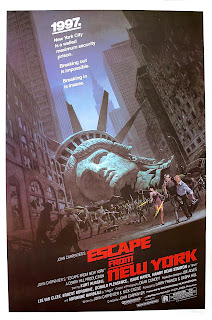 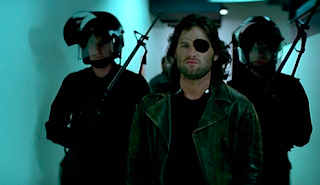 This is a film that I watched quite often when it was on cable in the mid 80's. I never got tired of it until years later. It was a film that is probably only the second on my list so far that I, at one point, memorized much of the dialog.

IMDB Story Summary:
In the future, crime is out of control and New York City is a maximum security prison. Grabbing a bargaining chip right out of the air, convicts bring down the President's plane in bad old Gotham. Gruff Snake Plissken, a one-eyed lone warrior new to prison life, is coerced into bringing the President, and his cargo, out of this land of undesirables.Written by Anthony Pereyra {hypersonic91@yahoo.com} 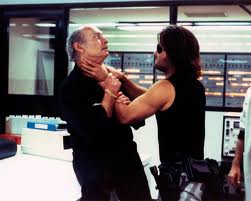 Ah, yes, John Carpenter. One of my favorite filmmakers. Escape From New York is the film that put him on my radar and since, have been a big fan. One of the main reasons for this is the creation of so many colorful characters and one of the best anti heroes in cinema history. Snake Plissken is handled perfectly by Kurt Russell. The other characters are fun in this commentary of society of the day. We have on display a warped view of New York City which is now a prison of the future. The film pokes fun at crime, the police, New York and many of its features and icons. Carpenter weaves a tale that criticizes leadership and puts our ultimate rebel in a situation of eventually having the last laugh. 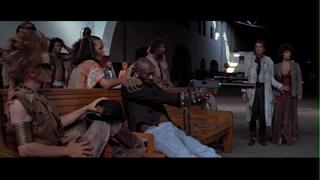 Escape From New York is both fun and exciting while staying dark and biting. It is hard not to fall in with Snake's point of view as he is mostly an observer of the world of this future. He wanders from scenario to scenario and meets all kinds of rift raft. He is forced into being a hero but manages to soil this with acts of sabotage against an uncaring President.

The look of the film is relentless with only a couple of day time scenes. The dark nature of the film is highlighted in its night time setting with moving shadows and all kinds of things happening all around Snake. The music featured in Carpenter's signature electronic score and covers the movie in a perfect blend of action and mood.

The film was considered by many to be a cult classic but it probably has moved passed this to a mandatory viewing status for Sci-Fi, action and tough guy type movie fans. What a risk Carpenter took casting Russell, known for his Disney films, as this tough action hero.

It is a shame that the next story for Snake Plissken was horribly handled in the sequel, Escape From LA, by the same genius that made him in the first place. 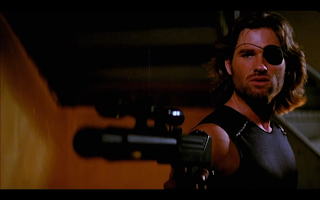 I am interested in the planned remake and feel that it could be done well, but really have we not seen Escape From New York like movies over the past bunch of years. No Escape, Doomsday and Lockout are all examples of this not to mention movies of so many other anti hero tough guys.