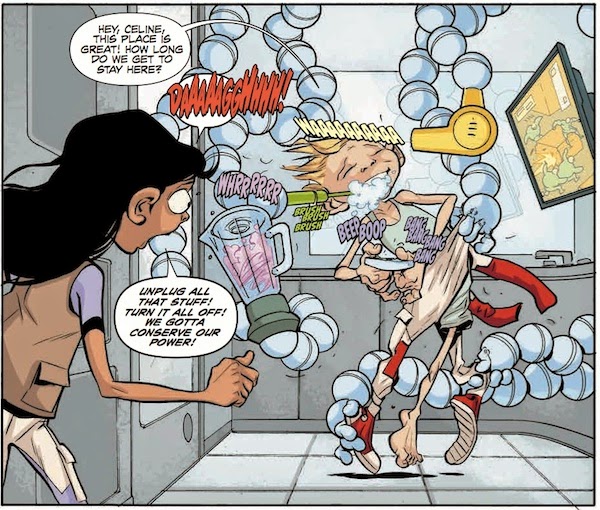 HOWTOONS, the comic that taps into kids’ imagination and curiosity with DIY science projects, is back with HOWTOONS: [RE] IGNITION. In this February graphic novel from Image Comics, Celine and Tucker are siblings who wake up in the far future, where energy is scarce and their parents are missing! They explore a strange new Earth using their gadgeteering skills to create projects and experiments to survive hostile tribes and bizarre mechanized threats — projects and experiments kids and parents can make themselves at home, and learn basic energy literacy at the same time!

“I love making things, making comics. So it’s cool to be able to share that with kids and show them all these different disciplines,” said Dragotta in an interview at Multiversity Comics. “Hopefully we can provide an entertaining story first, that will motivate them to build the projects in the book. Maybe learn something through play.”

In HOWTOONS there is something to interest every kid who picks it up, Dragotta explained, whether they’re into art, stories, design, or engineering. “If the book serves as any kind of primer to opening a reader up to something new, I’m all for it,” he said.

Van Lente praised his artistic collaborators in the same interview. “Tom has such great dynamism and expressiveness to his figures,” he said. “he’s really perfect to work on a kids-oriented project that needs to be full of energy — no pun intended — and he and Jordie have done so many projects together they’re kind of mind-melded. It’s mildly frightening.”

Melding science, technology, engineering, art, and mathematics (STEAM), HOWTOONS: RE [IGNITION], is perfect for kids from ages 8 to 12 and a must-have graphic novel for every classroom. It will be in comic book stores on February 25 and in bookstores on March 10. Specially priced at $9.99, HOWTOONS: [RE]: IGNITION  is available for pre-order now.