41 DVD Disc Set for Doctor Who 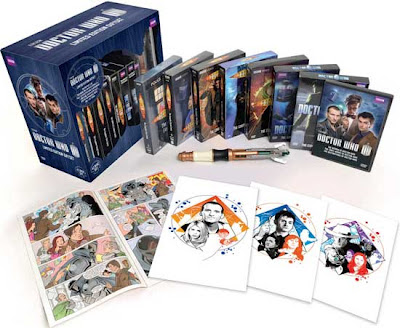 BBC America is releasing a limited edition box set featuring all episodes from the first 6 seasons of the "New" Doctor Who.  The set will include Christopher Eccleston, David Tennant and the first two seasons of Matt Smith.

It also includes an "11th-Doctor-style" Sonic Screwdriver, a comic book (or graphic novel if you prefer) called "Doctor Who at Comic Con," and three original art cards (one for each Doctor represented in the set). New on-disc content, to supplement the included bonus material identical to what's already available on the individual season sets, was said by the BBC to consist of "3 new Doctor Specials coming to DVD for the first time ever."