Doctor Who - The Power of Three Review (some spoilers)

The Power of Three 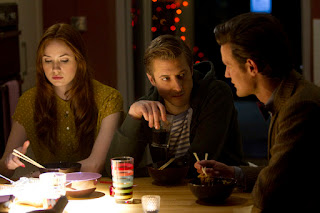 
So basically we have three filler episodes in between a Dalek story and the final Amy and Rory story. So far nothing to write home about. Could The Power of Three salvage a half season that so far has one excellent, on okay and one bad episode? We will assume the fifth story will have enough emotion in it to achieve a passing grade so it is up to the fourth story to make something happen. 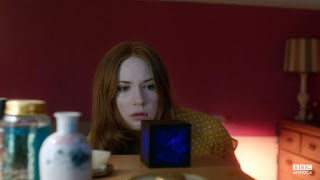 Well, I think back to A Town Called Mercy and a story that is okay but not great. The Power of Three is supposed to be a year long event where mysterious cubes on Earth keep the Doctor's interest. Apart from some adventures through time (the Zygon tale sounded more interesting than this one to tell you the truth), the Doctor spends a whole year examining the cubes to no avail. When the cubes finally do come to life to reveal is not very interesting. So they are here to cause heart attacks for everyone on Earth. Seems kind of silly. Chris Chibnall is at it again with his second and thankfully final story of the season (hopefully). 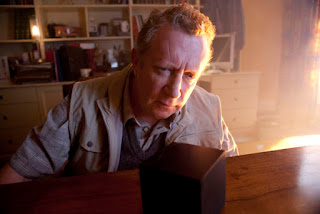 Again, like A Town Called Mercy, there are a few good scenes. Knowing that Amy and Rory are leaving next episode, there are some powerful moments and frankly interesting themes studying the mind set of a companion. How they can adjust to “normal” life after or in this case, during their travel aboard the TARDIS is pretty good focus for this story. We see some shallow acting pieces for Karen and Arthur trying to emphasize this. This appears to be a common happening this season. We have seen very little powerful acting from these two. Some Amy and Doctor scenes were okay but nothing as moving as we have seen with previous companions like Donna and Rose. I suspect Karen and Arthur will make up for this next episode but still, it does nothing to make these lesser stories and better. It is as if the chemistry is not there (I would argue it never was) or that the performers are going through the motions and hopefully saving it all for The Angels Take Manhattan.

The idea of the cubes is pretty juvenile. This sounds like an idea that 6 year olds can come up with (I am trying not to attack six year olds here). We had a couple of weird looking nurses kidnapping people for some unknown reason. I would think that if someone wanted to kill all humans they could figure out an easier and quicker way to do it as well as do something with security so someone with a magic wand (or sonic screwdriver) cannot undo everything that was done. Why were those people on board the ship? Why was it do easy to get them back? Why bother having a countdown on the cubes? Why wait that long to activate the cubes? Why does the UK only have one Christmas song that plays during every Christmas scene of the new series? All of these questions can be answered but do point out so many plot flaws. 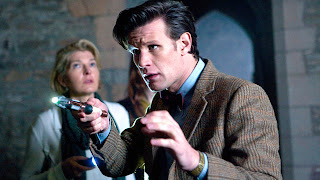 Now I did not think this story was nearly as silly or stupid as Dinosaurs on a Spaceship. The story was pretty simple (almost too simple) and not full of itself as we had seen of late. It also was good to slow down a bit although the slow down felt sped up as they showed so many clips from over the months.

I did like some of the moments with the Doctor and Amy and the Doctor and Brian. These point to the upcoming farewell but also give us some good and quick insight on the Doctor's relationship with his companions. I really liked when Rory stuck up for his job, putting the Doctor in his place. These moments are very good and perhaps some people will use these as strengths of the story, in which case, okay. Still with so many other problems that I cannot ignore, I have to put this one down lower on my list.
Posted by SHADOKP at 6:36 PM

Email ThisBlogThis!Share to TwitterShare to FacebookShare to Pinterest
Labels: Doctor Who review, The Power of Three