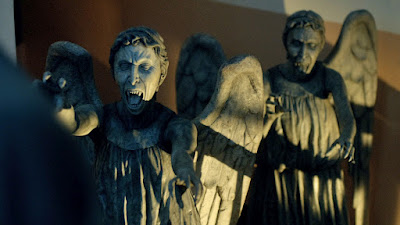 First things first (and in no real particular order):

Angels Take Manhattan was assuredly one of the creepiest television episodes I have seen on any program. It was one of the scariest Doctor Who episodes I have ever seen. I choked up at seeing the lovingly brave resolve of two characters who, whatever anyone may think of their place in the Doctor Who universe, exemplified a level of personal commitment that should inspire. And finally, I am in admiration for the new perspective we have of the Doctor. Fire and Rage, Oncoming Storm, Time-Lord Victorious—and when it came right down to it, he could not fix this, and he really should never be alone.

So, on to the episode. Keep your Daleks, Davros. Cyberleader, go rust in a corner. Ice Men, sleep another several million years or so. The Angels are frightening. They are with us. In our cities. On our buildings. Walk by a graveyard, you may see a winged figure standing quiet watch.  Look up at the high buildings. They are gracing the tops. Perhaps you don’t remember the last few days because—you blinked.

The Angels in Manhattan have taken over a building, and are using it as a farm to feed off time energy from zapping people back through time. They focus on Rory as another target, and zap him back to 1938. There, Rory meets his lovely daughter Melody, aka River, as both are captured by the sinister Mr. Grayle, who collects art—including Angel statues. He should have watched Blink. The Doctor and Amy race through time and space (back to ancient China where the Doctor manages to leave the clue-word “yowza” on a vase just to enable River to provide him with a signal so he can bring the Tardis to the proper location. Of course, the four do reunite, but—well—things don’t proceed well. Eventually Rory realizes that if the Angels plan to use him, he will take away their ability by a supreme sacrifice. And true to the depth of connection we have been presented in these two since they both first arrived, Amy decides to join him. To the Doctor’s complete and utter enraged dismay.

All this is sparked by the Doctor reading a book by “Melody Malone, who investigates Angels.” As the story progresses, they all learn that “Melody” is in fact River herself. By the end of the story she knows she has to write this book and send it to Amy for publication. 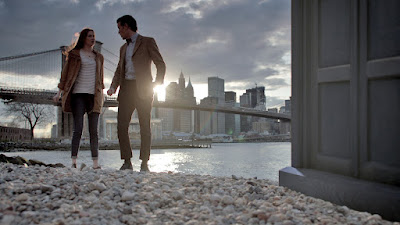 Now, this is where the viewer might just stop, wipe away a tear or two, swallow through the lump and the throat, and simply scratch head and say “what? WHAT?” Yes, I certainly paused. The whole racing through time to ancient China, having River suddenly appear right then AS Melody Malone, and oh yes, using the Melody Malone novel-as-source---those offset my emotional bond to this episode in general. Briefly, I emphasize. See, this is time travel. Time travel in a machine that looks like a police box flown by a regenerating 1200 year old alien. Who has created a few paradoxes along the way. I present as one example, The Doctor’s Daughter. The Tardis takes them to the planet because of Jenny, but, before Jenny has even been created. Thus the Tardis ends up causing her to be created while it raced to go meet her.
Now, lest one think that I might be overly-extremely tolerant of plot holes and vague plot construction—I am capable of debating the story in Inception with great enthusiasm. There should most definitely be consistency and a coherent logic in even Doctor Who. 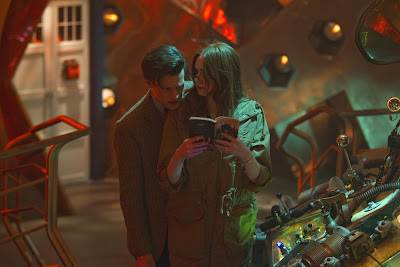 But let’s face it—there is a stronger consideration here. At its heart and in its soul, Doctor Who, at least in my opinion, is mostly about the people. People sharing impossibly amazing adventures which are possible only because the people--the Doctor and his Companions--have each other upon whom to rely.

Our favorite Time Lord has always had companions. Many came and went through his life, but only since the Ninth Doctor have we come to appreciate just how much his companions have come to mean to him. I have said this before (as have other essayists in other places) but it can always bear repeating. Since 2005, Doctor Who has presented audiences with the power of friendship, of trust, of commitment, the wonder of “having your friend’s back” no matter what.  Audiences shared all the “I love him, the Doctor” moments since Rose. But Amy and Rory have taught us that love exists separate and apart from the Doctor- that he may share in some reflection of that love, but in the end, we humans decide our destinies. Amy and Rory make it fashionable to love someone just that deeply—and not have it be the Doctor. 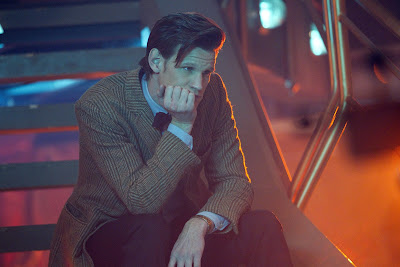 The Doctor and his companions are fictional, and not real. They resonate with us most strongly simply because (setting aside all the “OMG I want to marry the Doctor” and other assorted fantasies) they show us that friends matter, and friendships carry us through. We love, we endure loss; whether or not we ever love again thereafter, we have known love. It never leaves us because it was with us once. The Doctor has been told he should never travel alone. Neither should we. In a way, alien though he is and will remain, however he regenerates, with whomever he may travel, his overpowering need to never be alone, is also ours. In that moment, he becomes the most human. The Doctor once said that his friends “are the best of him.” That is the kind of friend we want to be. That is the kind of friend we want to have.

The Doctor will return.  RIP Amy and Rory. Thank you for flaring so beautifully—and you really never faded.
Posted by Marie Antonia Parsons at 10:52 PM