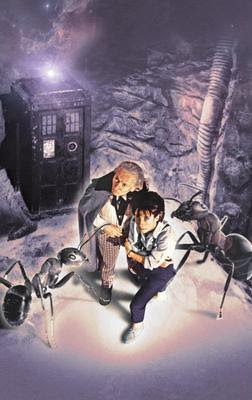 
On Saturday September 29, The Paley Center for Media (www.paleycenter.org) in New York City screened the classic Doctor Who episode, Planet of the Giants. Prior to the start of the episode, the audience participated in a brief trivia challenge. The person who gave the correct answer when chosen received a special DVD donated by the BBC.

Here are the three questions for your own enjoyment. Do you know the answers? No Tardis.wikia please!

2--Two years before Planet of Giants Carole Ann Ford, who plays Susan Foreman, had a role in the film version of which classic science fiction story by John Wyndham, which featured carnivorous plants?

3--Who was the Doctor when Jacqueline Hill, who plays Barbara, returned to the show as Lexa?

Answers will be given at the end of this report. 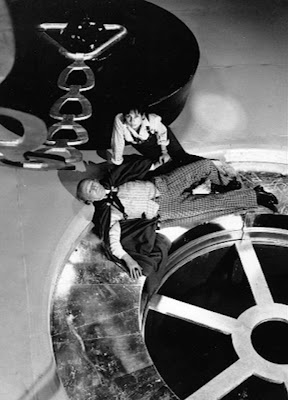 Planet of the Giants, starring William Hartnell playing the First Doctor, with Carole Ann Ford as Susan, Jacqueline Hill as Barbara, and Ian Chesterton as Ian, was digitally remastered by the BBC to be shown at various venues around the US. The Paley Center has been featuring a different Doctor Who episode for the past few months. Next month’s screening will be Tomb of the Cybermen. The Center hopes to continue offering episodes through December and thereafter.

The Benneck theater at The Paley Center, seating about 180 people, is far smaller than the Ziegfield theater where Asylum of the Daleks had been screened last month.  But with almost two-thirds of the theater filled with appreciative Doctor Who fans, the energy in the room made it feel bigger. Viewers are surely more familiar with 21st century technology, grander set designs and wider-angle camera lens shooting. So portions of this old classic episode sparked some undoubtedly unintended humorous reactions. The premise of the story, briefly, is that the Tardis, just as it was about to materialize, found itself shrunk so small that Ian could fit inside a normal matchbox.  While attempting to explore their surroundings, our four heroes discovered that a potential new insecticide will in fact kill all the small insects, even those generally considered beneficial.  Barbara inadvertently touched the substance with her hands, and spent quite a while stoically convinced she may die, while not telling the others until they see her looking ill.  Of course, everything works out well, the four return to the Tardis, and the Doctor duplicates the flight so they all return to normal size. On to the next crisis (World’s End!)

When the camera focused on the Doctor’s reactions to things—as when for example, he told the other three that he is certain everything would be all right, but then, when they turned away, he looked quite worried; or, when he decides he just has to find out what is really going on (oh to hear him say some variant on the line “let’s poke it with a stick”-one could see hints from the Eleventh Doctor, surely (as well as other previous Doctors.) There is some bond amongst all of these performers, regardless of their age. The character is most superb when he displays that concurrent hint of ancient wisdom, carefree curiosity, boundless arrogance, and deep-seated worry for his companions.  William Hartnell set the standard for all the Doctors that followed. He may have been the only one so far to perhaps look several centuries old (and he carried that so well) but his physical appearance was balanced well by his marvelously innocent curiosity.  Eleven’s physical appearance is oh–so young—but he carries through with a very ancient soul.

There was something sweet and precious in hearing that very first title music. It even had a kicky little rhythm to which one could dance (if one was feeling the mood). What they managed to do with a very small shoestring budget is admirable. Even years later, Planet of the Giants provided its audience with 90 minutes of entertainment. Not many television shows can say the same.

Of course, it was Doctor Who. But even Doctor Who fans are not always tolerant or forgiving. This audience, happily, was very content, and happy.


And now, the answers to those three trivia questions.


1—The Mouse That Roared.


Oh for a really good Doctor Who Trivia game.

Better yet—a marathon screening of all available First-Third Doctor episodes. In a theater near you. We can hope.

Email ThisBlogThis!Share to TwitterShare to FacebookShare to Pinterest
Labels: 1st Doctor, doctor who, Planet of the Giants, William Hartnell