A Review, sort of, of Dinosaurs on a Spaceship. (may contain spoilers, sweetie) 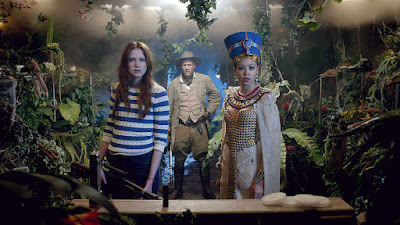 Dinosaurs on a Spaceship Review
By Marie Parsons, aka @mAntoniaP.


I confess, I am a sucker most of the time for a Doctor Who episode. Having just watched a bunch of classic episodes with Tom, Peter and Colin, Doctors 4, 5 and 6, I felt very prepared to proceed into another journey with Doctor Eleven. This time he is joined by the Ponds, Egyptian queen Nefertiti (of the famous blue-Crowned bust) and a less familiar big-game hunter named Riddell.  Their task, it seems, is to board a strange spaceship heading for a collision course with Earth. The Indian Space Agency is preparing to fire missiles at the ship before it crashes.


Let's ignore the slightly worn-out, but oh so comfortably familiar little literary technique, where alien computers still easily respond to button-pressing, finding data records is easy, and a non-human computer responds to human Earth English. The big robots are cute, even while being deadly. The Triceratops is adorable, and, well, some folks would say Solomon's fate was decided the second he gave that particular order. 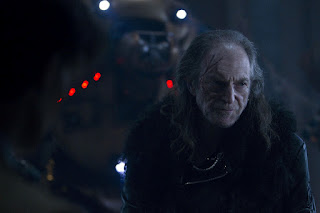 This episode still holds much that is sweet, and bitter, and bittersweet. Children will love seeing the dinosaurs, they may cringe, or, giggle, at the antics of the big metal tantrum machine robots. Older folks may roll their eyes and smile at the brief innuendo comments between queen and hunter. So what, I say. We can allow some small things to slide by.


What is sweet is the tie-in with a race from past Doctors' journeys, including the current, a tie-in which makes it somewhat logical that there are indeed Dinosaurs on a Spaceship. What is sweet is that we are given a glimpse of elder Williams, who gets a glimpse of the interstellar, inter time life, and bless him, as have the queen and the hunter, not really batted an eye. How many of us might really say we could do the same, no matter how strongly we fantasize about travel in the TARDIS?
What is also sweet is to see Rory being the medical professional, for his dad. That seemed to happily close some standing issue between them. 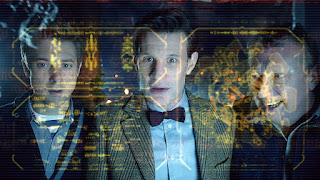 What is bitter is that the Doctor shows up dark--although, one does spend a moment or eleven, wondering if, in all those journeys in 900 and more years, he never ever stepped aside and let penalty take its course. After all--there is still that Time War about which we know practically nothing really. And there is that Time Lord Victorious, lurking deep within as a demon, perhaps? Those looks the Doctor gives Amy, as if he knows something is coming to be amiss, can be discounted--or not. Whether he has foreknowledge, or whether he just senses their time together is simply ending as it has with all his companions over time--that matters not. Friendships come and Friendships go, one way or other. What is more startling herein, is that amidst all the wide-eyed fascinated delight about seeing Dinosaurs, is that the Doctor, brilliantly backlit, is truly really indeed capable of stepping aside, out of the blaster shot, and letting fate take its course, so that the missiles find a target after all. 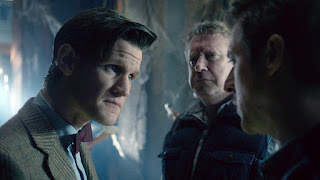 This one time, not everyone lives. This time, those that use the sword....well...he did not fire the missiles but....what will matter most, in the future, is if the Doctor fights that particular demon. He has not really had any reason yet to battle that. The Time Lord Victorious has not really been cast off. There has been no time. The four knocks, Regeneration, the skin of the universe was cracked, he met a child whose brain was filled with all that, and then it was the Silence and Lake Silencio. He has not stopped or slowed down.


Maybe Dinosaurs and Solomon's fate will be the next step toward a cleansing of soul.


Or maybe not. Maybe some adventures just have to happen as they happen.


Guess we have to wait and see.

Email ThisBlogThis!Share to TwitterShare to FacebookShare to Pinterest
Labels: Dinosaurs on a Spaceship, doctor who, Doctor Who Series 7