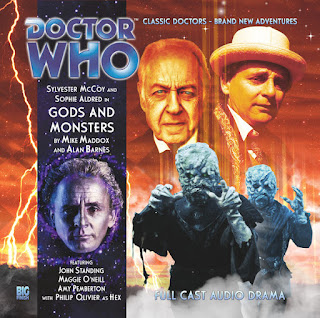 Big Finish has released Gods and Monsters today and this is the 3rd part of this 7th Doctor Trilogy.  The below synopsis is from the Big Finish website

The September Doctor Who releases begin with the latest main range full cast audiobook Gods and Monsters, which finds the Seventh Doctor and a gaggle of companions facing off against the evil Fenric!

Gods and Monsters, by Mike Maddox and Alan Barnes, finds the Doctor in grave danger, with his latest manipulations having gone wildly out of his control. And he's got a lot of explaining to do to four companions wanting to know just why they've all been brought together...

Starring Sylvester McCoy (the Doctor from 1987 to 1989, plus the TV movie) and Sophie Aldred as Ace (as seen on TV from 1987-1989), alongside Philip Olivier as Hex, Maggie O'Neill as Aristedes and Amy Pemberton as Sally, Gods and Monsters is the epic conclusion to the latest trilogy of Seventh Doctor main range adventures, and pulls together threads which have been building since Ace's first appearance way back in the TV story Dragonfireand which have continued through recent audio range releases!

It also features John Standing, Blake Ritson, Gus Brown and Tim Treloar, and is directed by Ken Bentley. It can be downloaded now, and CDs will be posted out today.

You Can order it here

Email ThisBlogThis!Share to TwitterShare to FacebookShare to Pinterest
Labels: big finish, doctor who, Gods and Monsters