Well, after all the hullabaloo surrounding last weeks episode (which was very much a marmite episode - you either loved or loathed it) we all needed a well deserved break from space and Jurassic creatures.

The wild wild West, guns blazing, high noon standoffs, saloon bars and suspicious locals. This episode had it all with the added addition of a fiery TimeLord, war, regret & guilt. oh and of course a cyborg hell bent on avenging his creator.

How could I forget the transgender horse called Susan? Every Western should have one!

Yet again the Doctor lands in the wrong place at the wrong time. After ignoring the "KEEP OUT" Sign at Mercy's entrance (after all, the Doctor is allowed everywhere) and being promptly throw out of town, the Doctor and his companions learn that the town is under siege from a wayward cyborg (gunslinger aka Robocop) who is hell bent on destroying anyone who leaves the parameter of the town. As a result, they are slowly starving as they cannot leave to get supplies.

The Gunslinger has demanded they turn over the Doctor in order to regain their freedom. Initially it seems the Doctor himself is the target until he meets the Dr the Gunslinger wants called Kahler-Jex, a seemingly innocent gentleman who's spaceship crashed and was destroyed just outside the towns parameter and has helped the town through disease outbreaks and provided power for lights. Although the Doctor is delighted to meet Jex, there is suspicion in his eyes.

The Doctor decides to borrow Susan to return to the TARDIS to get supplies for the town and en route he discovers Jex's spaceship. Intact. Accessing the ship, he brings up Jex's personal files and discovers he created cyborgs including the Gunslinger from experimenting with innocent people. Enraged, the Doctor returns to the town to confront the lying Dr. On return he is intercepted by the Gunslinger who warns him he'll kill whoever leaves the town parameter next, and he better make sure it is Jex.

The Doctor angrily explains to the Sheriff what Jex has done and throws Jex over the parameter and keeps him there at gunpoint. Amy persuades the Doctor to not do it and as the Gunslinger fires the sheriff pushes Jex out of the way and takes the deadly shot, asking the Doctor to take his position as sheriff. The Gunslinger warns the Doctor he will come into town at noon the next day to destroy Jex.

Overnight, Jex admits he feels guilt for what he's done and wants the Doctor to give him up. Some of townspeople also want this and demand the same. The Doctor explains by doing this the sheriff's death would have been in vain and a plan is produced to help Jex escape thereby freeing the town. 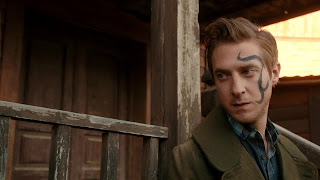 The Gunslinger turns up as promised, but is confused by multiple people running around with Jex's markings that identify him as a target. Jex manages to escape, but decides to use his spaceships self destruct mechanism to kill himself. The cyborg now has no purpose and decided to self destruct himself until the Doctor gives him a sense of purpose, to be the towns sheriff and protector.

The episode showed just how multifaceted the Doctor truly is. The pure anger when he confronts Jex is breathtaking, as he rarely shows this raw emotion at such intensity. His eyes were literally blazing with rage in this episode. The rage mirrors the Ninth Doctor in Dalek, guilt of the Ninth and Tenth together with the scorn and mocking of the Sixth Doctor. As always the playfulness, inquisitive, compassionate sides of every Doctor past and present are there which helps balance it out.

When Amy questions the Doctor's actions you can't help but think does she really know the Doctor as well as she thinks? He has committed murder, and destroyed two races including his own people. Yes Amy, he IS that person when put in the right circumstances and traveling alone without out you for a while isn't necessarily the reason why he's behaving like this. The Doctor is continually in emotional turmoil over his actions in the past, he cannot right the wrongs so he must live with them and try to redeem himself. The Doctor has a dark self loathing which he normally keeps under wraps, but the fury and guilt are unleashed when he comes face to face with someone like him who with initial good intentions destroys innocent lives. At the moment it seems this dark side is here to stay, and I for one embrace it.

Overall a fantastic episode, the Western format worked really well (although I kept thinking of Red Dwarf's Gunmen of the Apocalypse when I saw the cyborg in the trailer!)