Doctor Who Book Review "Magic of the Angels" 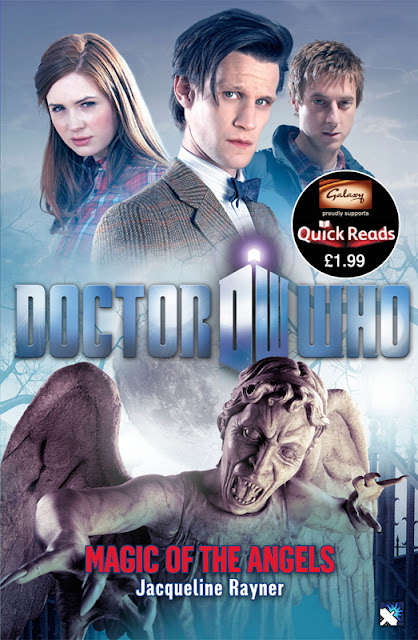 The Doctor, Amy and Rory are taking in the sites of modern day London.  They are sightseeing on a double decker bus and The Doctor is adding his own two cents which promptly gets the threesome kicked off the tour bus.  They decide to see a magic act at a theatre.  In fact they go and see Sammy Star’s Amazing Magic Act.  Sammy Star’s act has a really good gimmick one that keeps packing the people in every night.  That is where everything goes wrong.  In fact the gimmick that Sammy Star is using is a Weeping Angel one of the deadliest creatures in the universe.

This is the newest addition to the Quick Reads Doctor Who line.  In fact this is the first book in the line that I have read.  For those who don’t know Quick Reads are books that are around 100 to 120 pages and are a really nice short story.  So far I have found them to be pretty cool and enjoyable.  Sometimes when you are busy, like me being a parent with an active kid, it is good to read something that isn’t complex and short.

With that said what did I think about Magic of Angels?  Well I really enjoyed it.  I really liked how the Weeping Angel was used.   To use it to make girls disappear in a magic act is pretty clever.  Especially that the Angel is chained up and can’t move.
Plus this book was fun.  It wasn’t complicated which at times is a good thing for a book especially a short story.  There is nothing worse than a complicated short story which makes you scratch your head. Plus the story made sense and was just a nice adventure for The Doctor, Amy and Rory to have.  It lived up to its name as a Quick Read as it didn’t take me long at all to read.  It was indeed quick.

So if you have a busy life, just don’t have time to read a long book or just looking for a story that is quick and easy to read then I recommend Magic of the Angels.  It is a well done and fun book to read that captures the feel of an 11th Doctor story and has a lot of good things going on also that will keep you guessing.