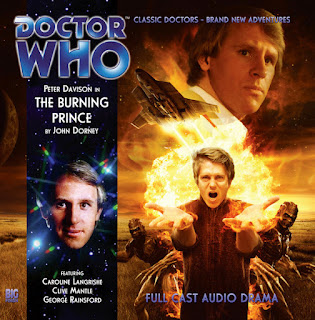 Big Finish has released the synopsis for The Burning Prince.  What cool about this story is that it spans across three Doctor's eras.  It will continue in the next two months with the 6th and 7th Doctor respectively and starts off this month with the 5th Doctor. The synopsis taken from Big Finish website.

Today's third Doctor Who release is the second of this month's main range full cast audiobooks The Burning Prince, the start of a new linked trilogy with each story featuring a different Doctor. This opener stars Peter Davison as the Fifth Doctor, who he played from 1982-1984.
The Burning Prince, written by John Dorney, is the beginning of an outer space adventure so enormous it couldn't be held on only two CDs! Prepare for a journey into the heart of the Drashani Empire, as three different Doctors take turns paying a visit and discovering that time can change many things...
The Fifth Doctor kicks off the trilogy, which continues next month with Colin Baker's Sixth Doctor (who he played from 1984-1986) in The Acheron Pulse and concludes with Sylvester McCoy's Seventh Doctor (1987-1989, plus the TV movie) making a final trip to the Empire in The Shadow Heart in November.
The Burning Prince also stars Caroline Langrishe and George Rainsford, and is directed by Ken Bentley. It can be downloaded now, and CDs will be posted out today.


You can order it here
http://bigfinish.com/releases/v/the-burning-prince-333