The Woman In Black Review 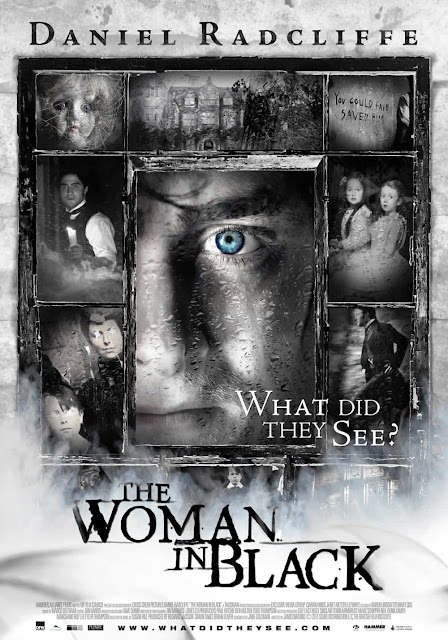 I’m not a big fan of today’s horror movies.  I prefer the horror movies of the past that don’t have to rely on gore and shock to scare people.  You know those films.  The slasher films that they come out with now a days.  Films like Saw and Hostel and the later movies in the franchise that star Freddie, Jason and Michael.  That’s why I was intrigued when I saw the trailer for The Woman in Black. 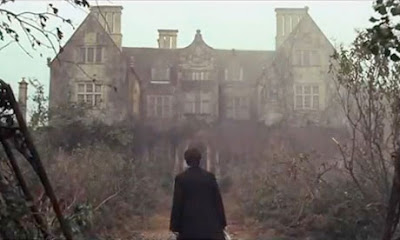 What intrigued me was the fact that it was centered in an old house and that the main character was seeing things that was not there.  Ghosts! This movie was about ghosts haunting this house and village.  How cool is that.
The makers of the film went back to the basics of how to make a movie scary.  There was not any crazy guy going around with a knife or an ax killing unsuspecting prey.  Instead you had a ghost of a woman who is taking her revenge on the town where she lived.  She blamed her sister for taking away her child and blames everyone else for not trying to save him when the carriage he was in sunk in the marsh resulting in his death.

I really enjoyed how the movie played on the fears of the main character Arthur Kipps.  Arthur is a lawyer who has the daunting task of going through the paper work at the house. He needs to make sure that the will that is on file is the only one.  What he finds out is far more disturbing and it seems to involve the entire village.   See Kipps is struggling with the death of his wife during childbirth of his son and doing this assignment for the firm he is working for is his last chance to keep his job. 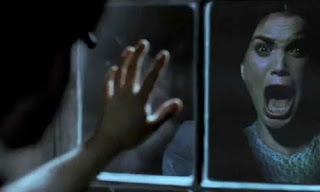 What also worked in the favor of The Woman in Black was the feel of paranoia that I had watching it.  I was ready to jump at the slightest sound and sight.  It was really cool to watch a movie and not have it over blown with lots of cgi effects.  In fact The Woman in Black relies on the old style of horror like doorknobs moving; open doors with no one there, rocking chairs rocking with no one in them stuff like that.  I’m not one that scares easily while watching horror movies but The Woman in Black did get me to jump a couple of times with a few nicely timed scares.   But what is its strength was also one of the things that were its downfall.  As I felt as there were one to many doorknobs moving and the like.  But nothing major to dampen the movie.  I also did not like the pace also.  For a movie that has a running time of 90 minute give or take I felt it got off to a slow start. 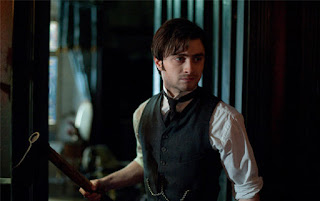 What is really cool about The Woman in Black is that it is the comeback film for Hammer Studios.  You remember Hammer Horror movies that usually starred Peter Cushing and Christopher Lee.  I do and that is why I had to check out The Woman in Black.   I also like the gothic feel of the film. All too often horror movies are set in present day so it was a nice to see one set in the past without modern technology.  Loved the gothic feel and the sets and costumes were awesome.   Another thing that should not be overlooked is the performance of Daniel Radcliffe.  His first movie since finishing Harry Potter movies and I have to say that he was excellent in it.  He was really convincing as Arthur Kipps.  You could really see the fright on his face and actually believe what was happening to the character.  Daniel Radcliffe is a true talent and this movie proves he isn’t just the pretty boy wizard that everyone loves.  So if you are in the mood for an old fashion horror movie and love gothic ghost stories then this is the movie for you.  But if you want to see it because you think Daniel Radcliffe is hot, well, just save your money and watch the Harry Potter movies on Blu Ray.
Grade B+

Email ThisBlogThis!Share to TwitterShare to FacebookShare to Pinterest
Labels: Daniel Radcliffe, The Woman In Black