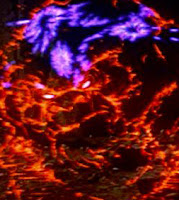 So many TV shows, novels and movies helped my interest in Sci-Fi grow throughout my childhood and into adulthood. The following is one of those movies that captured my imagination, being one of the earliest Sci-Fi movies I ever saw. Years later I revisited the movie after seeing visually stunning movies such as Star Wars, Close Encounters of the Third Kind and 2001: A Space Odyssey and was amazed at how incredible the effects and sets were in this movie, A movie that came out more than 10 years earlier than the earliest of those films. 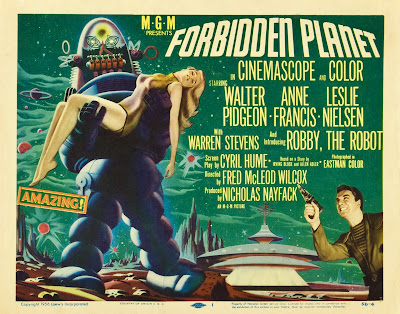 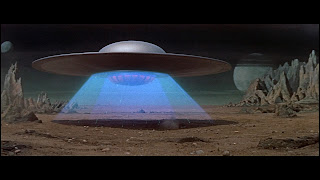 When Adams and his crew are sent to investigate the silence from a planet inhabited by scientists, he finds all but two have died. Dr. Morbius and his daughter Altaira have somehow survived a hideous monster which roams the planet. Unknown to Adams, Morbius has made a discovery, and has no intention of sharing it (or his daughter!) with anyone.Written by Rob Hartill

This movie reminds me of watching Saturday afternoon movies as a kid. The lure of playing outside was strong but the sounds and visuals of flying saucers and scary monsters kept me inside more often than not. 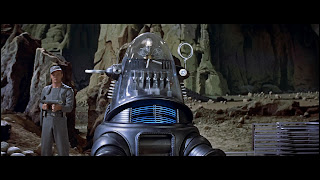 I also remember in my High School and college years sitting down in front of the TV at midnight to watch some of these classics and in the haze of early morning sleepiness, fended off with soda and chocolate cupcakes, I would experience these movies with a non drug affected open mind. 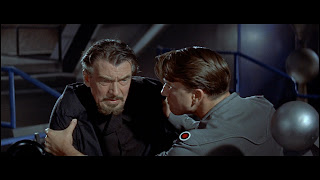 Forbidden Planet matches this type a movie to a T. One of my favorite types of Sci-Fi is space exploration and for once the plot did not revolve around Earth. The flying saucer does not come from an alien planet but instead, comes from Earth and actually visits the alien planet. Earthlings, to an extent are invading the planet. In the end it is the alien technology and the human mind trying to use it that endangers our protagonists. Flipping this imagery around must have been a refreshing twist to get away from the confines of Earth. Couple this with another twist in that all the aliens have been long gone for centuries and yet something is still alive killing the crew and you have a great formula for excitement. 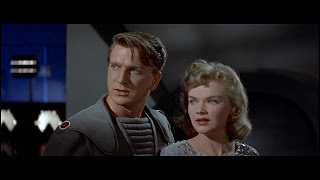 If this film as any weaknesses it may be some of the acting and dated concepts. The crew, with their tongues hanging out over the beautiful Altara, is sort of embarrassing to watch these days. Straight man Leslie Neilsen can be hard to accept as the leader of the mission especially because all of his comedy work since. His performance is good until he pairs up with the stunning Anne Francis and the writing falters, magnifying the dated feelings toward 'dames' and so forth. This plot line is important for it fuels Morbius's sub-conscious creature into attacking but the dated relationships are more awkward now than years ago and sort of stand out as bad acting at times. 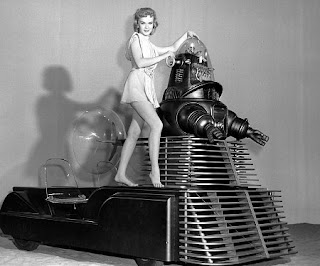 Still, Forbidden Planet deals with the human mind and the dangers of allowing technology to get beyond our control. It also deals with the coming of age of a young woman and the loss of innocence. We are also introduced to Robby, the Robot which shows us the good part of scientific advancement as well as giving us a glimpse at the Asimov rules of robotics.

To really sell the fact that this movie takes place on an alien planet, the producers spent money on elaborate sets and convincing matte paintings and effects. Bringing in a Disney animator to punch up the final touches and giving us a terrifying monster, the creators of the film ultimately succeed in this classic film that will go on to influence many other films and TV series. No other influence was more apparent and credited than for Star Trek. Many of the visuals and story would lay the ground work for Star Trek a few years later. This in of itself makes Forbidden Planet very important and now fondly looked upon by many. 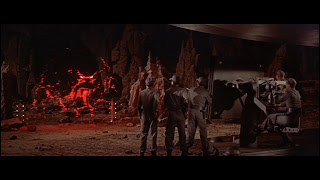 A couple of notes, I recently just purchased the blu-ray ($7.99) and watched the movie. I found it to still be excellent but did drop it down a couple of spots only because something else moved up and this film had those silly and clunky 'boy meets girl, boy falls in love with girl and boy lasers girl's tiger because it attacked her' moments. I also enjoyed the deleted scenes which included some pretty good material.