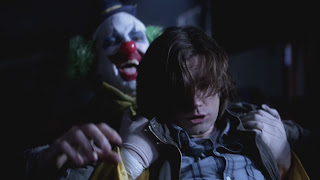 Some mysterious murders are centered around a kid's entertainment center. A killer octopus (or possibly an vamptopus) and a killer Unicorn raise the Winchester's suspicions even further into thinking something is not right here. The fact that there are clowns at this place is not going over well with Sam. Sam is frightened of clowns.

Parents are being killed one by one and they seem to be being done in by their own child's greatest nightmares. Now we have a shark in the ball tank and killer clowns going after Sam. There may even be a giant killer robot with lasers coming out of its eyes.

This is obviously one of the comedic episodes of the season and usually these are done very well. The story behind who is doing this and the wrapping up of the story is a bit lame but the rest of the story is pretty good, complete with Dean chasing down a man in a lion costume and Dean trying to win a giant slinky toy.

Its always good to have these episodes from time to time and this one fits right in with the rest of the classic funny ones.