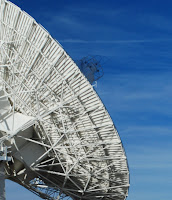 Some of my favorite movies are the ones that sneak up on you. These are movies you have heard little about or may not even be looking forward to. Expectations can sometimes ruin a film especially if you are hoping for much more. Hype and positive reviews can also dampen your viewing of the movie. Some films on my list are movies I went into not knowing much about them and may have gone to see them because that was the movie of the week. This film certainly fills this description. I know that I was interested from the trailer and was always eager to see true Sci-Fi movies as a change from the action packed movies with Sci-Fi elements in them. 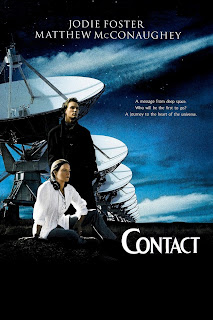 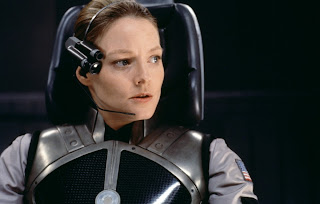 Astronomer Dr. Ellie Arroway has long been interested in contact to faraway lands, a love fostered in her childhood by her father, Ted Arroway, who passed away when she was nine years old leaving her then orphaned. Her current work in monitoring for extraterrestrial life is based on that love and is in part an homage to her father. Ever since funding from the National Science Foundation (NSF) was pulled on her work, which is referred to some, including her NSF superior David Drumlin, as more science fiction than science, Ellie, with a few of her rogue scientist colleagues, have looked for funding from where ever they could get it to continue their work. When Ellie and her colleagues hear chatter originating from the vicinity of the star Vega, Ellie feels vindicated. But that vindication is short lived when others, including politicians, the military, religious leaders and other scientists such as Drumlin..

I really enjoyed this film and all of its messages. I guess the messages of God and so forth were a bit over the top but still the entire scope including the character study of Ellie Arroway are perfect in this film. As with many of the films on this list, I was especially interested in the science part of the tale including the discovery of the signal and building of the travel device. Taking a book from This Island Earth and A is for Andromeda, the aliens in the film send an Earth scientist the information in enabling them to communicate/ travel to them.

Every film has its flaws and some convenient developments including the second construction of the alien device diminishes the final product a bit. I always find these types of movies to be a breath of fresh air. We don’t need all the answers. We don’t need the aliens revealing themselves to everyone. The pay off is the character development.  A very get set of actors all around, for the most part, keeps the movie believable and Jodie Foster does a great job in the part.

I found the trip to the far away planet to be very 2001 like in its scope and like a child fell in love with the wonders of the universe as seen in this movie. An attempt at keeping it realistic and routed into the present day was handled well with the use of real news footage.

This movie keeps moving up and down my list and until recently was up a bit higher, for whatever reason.

When did I first see this film – opening weekend in the theater
How many times have I seen it – 6-8 times
I actually do not have this on disc.