Grumblings From The Long Box # 1 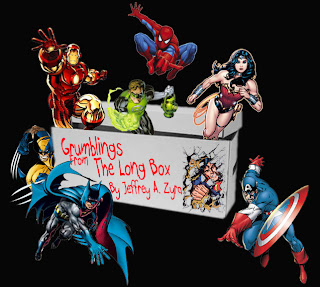 A new semimonthly article about my take and rants on the comic book world.  So here we go with the first rant from my super intelligent mind.  Well I have recently read two graphic novels. One graphic novel I did like and one graphic novel I was pretty much disappointed in.


We’ll start off with the one that I enjoyed.  Here Comes… Daredevil by Mark Waid, Paulo Riveria and Marcos Martin and it is a collection of the relaunched Daredevil comic book issues 1 to 6.  I don’t read a whole bunch of Marvel Comics but I went on the recommendation of a few friends from Twitter and decided to give it a try.  I used to read Daredevil back in the day when Frank Miller was writing the book and kind of was disenchanted with the character during Bendis’s run so I was a tad hesitant in picking it up.

I was glad I did.  For I really enjoyed reading Daredevil in fact I read it in one go which is something very rare for me.  So considering that I read it in one go you can assume that it was pretty good.  Well in fact it was pretty amazing.  In fact it was a whole new take in Daredevil that dealt more with Matt Murdoch helping people out in the court room.  This is something that hasn’t been done that much but what makes it interesting is that Matt Murdoch coaches his clients into defending themselves.   Plus don’t worry there is plenty of Matt Murdoch dressed up as Daredevil taking down the bad guys and helping the innocents.   I enjoyed this new version of Daredevil that I am eagerly awaiting the next volume of Here Comes… Daredevil.

The other graphic novel that quite frankly disappointed me was Teen Titans: Games.   It was written by Marv Wolfman and art by the legendary George Perez.  The problem I had with the story was that it was dull.  Not really very exciting at all.  Sure there was action in it but there just seemed to be too much interaction going on.  What is disappointing was that this was planned over 20 years ago and at that time the Titans was a kick ass book.  This book just doesn’t live up to Titan stories of yesteryear and that in itself is quite disappointing.   Besides the dull story I did love the art in Teen Titans: Games.  In fact the great art is the main reason it took over 20 years to complete the book.  As fans of George Perez art work know all too well.  But the art work is indeed worth the price of the graphic novel and is just pure classic George Perez.

If you haven’t been reading Batman written by Scott Snyder you are doing yourself a disservice.  He has written probably one of the best Batman stories in a long time and has introduced us to a new protagonist for the Caped Crusader.  The Court of Owls is one of the more unique Bat villains to come down the pike in a long time and I am really curious to see what happens next and how The Court of Owls will affect the rest of the Bat Books.  Plus Greg Capulo art is fantastic also so go out and read Batman as issue 5 and 6 are really good.  That is all for now so go out there and support your local comic book store and happy reading.
Posted by DR5WHO at 10:45 AM