Looking Back: The Last Starfighter 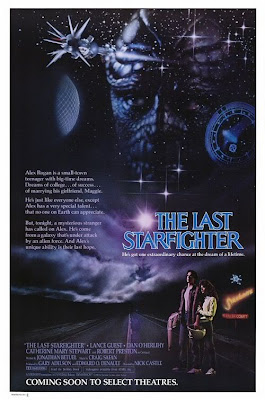 
While scouring Netflix for 80’s era Sci-fi movies I came across this movie which I haven’t seen since the 80’s.  The Last Starfighter came out in 1984 during the height of Ronald Reagan and Margaret Thatcher.  It is also the year that my son’s gymnastic teacher won the gold medal for team all around for USA in Los Angeles and it was also the year that The Boston Celtics, Detroit Tigers, Oakland Raiders and the Edmonton Oilers all winning championships in their respectful sports. 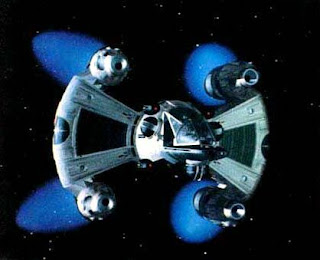 Well since I haven’t seen this movie since the 80’s I was wondering if it held up after all these years and would my childhood memories be ripped apart by my adult mind as I watched it again.   Another reason for watching this movie was so that I could watch it with my son and get his reaction to it. As a normal 7 year old he enjoyed the movie with all its archaic looking effects and sappy story.  That’s more or less how I felt after watching this movie back in the 80’s but at an older age than my son. 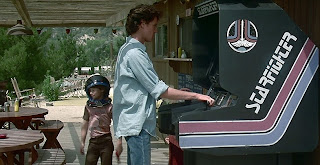 So what did I think about The Last Starfighter now that I’m older and much wiser.  Well one thing for sure.  This movie will not be on anybody’s top 25 lists of sci-fi movies but for what it is The Last Starfighter is not all that bad.  Sure the effects are dated and they use something that resembled the effects style used in Tron.  But for those of us watching movies in this day and age those effects look pretty lame.   The overall story isn’t that bad.  A boy is super good at video games which is what the aliens use to recruit starfighters.  A pretty clever premise using video games which had just come into its own in the 80’s and as anyone who grew up during that decade knows that playing video games in an arcade was all the rage.  But other than that The Last Starfighter was a pretty basic story with some pretty funny moments.  But with most 80’s movies it is also pretty sappy when it comes to the love interest and this movie is no exception.

The Last Starfighter is not a classic by any means but if you want to watch a movie that is pretty enjoyable and kid friendly then this movie still holds up in that aspect.  If you’re looking for a great action movie well then this movie is not for you and maybe you should check out Star Trek 3: The Search for Spock.  After seeing this again I did enjoy the movie even though it was dated and the special effects were pretty lame to today’s standards.  But I did enjoy The Last Starfighter even though it had those quirks and that some of the acting was well not all that good.  But The Last Starfighter did have some pretty good moments and did have some scenes that did garner a chuckle or two.
Grade C+

Email ThisBlogThis!Share to TwitterShare to FacebookShare to Pinterest
Labels: The Last Starfighter