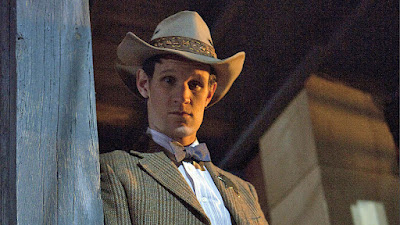 Category: BBC One; Drama
Donning the compulsory tweed for the third time, Matt Smith gets ready for more adventures through space and time as the Doctor. Here he talks about his hopes for the new series, what fans have to look forward to and saying goodbye to the Ponds.
Asylum Of The Daleks is going to be a cracker, states Matt as he talks excitedly about the opener of the new series. Steven has written and absolute belter and we have made the Daleks scary again, something I am not sure we got right before.

With Asylum Of The Daleks featuring Daleks from all of the decades, does Matt have any favourites?
Absolutely! The blue and white ones from the 1960s, I think they are from the Troughton era… they are just kind of groovy, smaller but fantastic. And the lovely Barnaby (Edwards) who operates them. The day we filmed with all of those Daleks there was such an excitable atmosphere on set from cast and crew alike. It was a brilliant few days at work!

With five big adventures for the Doctor and his companions, this series it is set to be epic. We have five of the most exciting standalone episodes, with everything from Daleks to dinosaurs and of course, the fall of the Ponds, explains Matt. So does he have a preferred episode?
Well I love Asylum of the Daleks and episode 5, but I am immensely proud of all of them.
The second episode sees viewers taken on an incredible prehistoric adventure with the unusually titled Dinosaurs On A Spaceship, so what did Matt think when he first heard those four words?
Steven, you are a genius! It’s Doctor Who in a nutshell. I have always wanted to do a dinosaur episode, he continues, so I was very pleased to get the chance. And the Director Saul (Metzstein) has done a fantastic job, with David Bradley playing a cracking villain. I think it is such a fun episode with a wonderfully crafted script by Chris Chibnall.

During this series Matt Smith’s Doctor gets faced with a lot of new challenges. Not only did he get to live out many a childhood dream of becoming a cowboy for the day by riding a horse in the western themed episode, A Town Called Mercy, but he also got the once in a lifetime opportunity... to ride a dinosaur. More painful than you can imagine, Matt gives us an insight in to just what that was like
I had to wear padded trousers! Dinosaurs are a lot lumpier than horses, so it was a painful couple of hours, a laugh though and definitely worth it as it’s going to look great.
As the most ambitious series to date, locations play a key role in creating scale and meeting that ambition. Travelling to the Spanish mountains for episode 1, Almeria in Spain for episode 3, A Town Called Mercy, and New York for the Pond’s departure in episode 5, Matt believes they really help transport the viewer and the character, commenting that, There is only so much CGI can do. We were in the middle of a western village, which was brilliant for Doctor Who, adding to the imagination of it all. And I am such a fan of New York, and we got to use some properly iconic locations, like Central Park. There is nothing quite like running through Times Square trying to shoot a scene.

As well as visiting new locations and facing new monsters, Matt got his first taste as Doctor of what it is like to be on the receiving end of one of the show’s most widely known formulas, a change in companion.
It was terribly sad and I do miss them as they are such great chums, Matt shares his thoughts on his last days on set with Karen and Arthur, we knew it was coming, but just didn’t believe it. It is one of those things like when you are on holiday and you suddenly realise it is Friday and you are going home on Monday. But that is what the show is about, evolution and regeneration, and we now have Jenna who is lovely and great.

So did he agree with Steven’s choice to send them out in an episode with the Weeping Angels?
Oh absolutely, I think I can speak for all of us when I say that the Weeping Angels are one of our favourite monsters. The fact that they don’t speak just makes them crueller. And with the last episode set in New York and to have River back, it all just made sense. I really think, Karen and Arthur go with a bang and tear!
Stupid dancing, stupid faces and stupid everything, is how Matt sums up what he will most about having Karen and Arthur on set. Being ridiculous, there were points when we wouldn’t even have conversations, but just make noises at each other. We had a laugh and that really informed the energy and spirit of the show. The relationship between our characters on screen and off screen really blurred!
Renowned for his pranks on set, Matt gleefully explains how much he used to enjoy making Karen scream, I used to hide in her trailer a lot and just jump out at her and she is a real screamer. Or I would dance really close to her face, which would also make her scream! It was very much like a brother and sister relationship with Arthur and I pranking her like older brothers!
Posted by DR5WHO at 8:37 AM

Email ThisBlogThis!Share to TwitterShare to FacebookShare to Pinterest
Labels: doctor who, Doctor Who Series 7, Matt Smith