From the back of the box: Luc Besson presents this futuristic thriller about a renegade CIA agent Snow who is betrayed by his government and sentenced to 30 years frozen in a cryonic chamber 50 miles above Earth. The only way to avoid serving time is a suicide mission -- overcome a gang of ruthless prisoners and rescue the President's daughter, Emilie Warnock.


The minute I saw the first trailer for this movie, I was like "On it."

Do not believe the spiel people were throwing around about Lockout being the new Blade Runner. That was just Hollywood hype trying to pull in the hyper cool noir crowd. Really, they should have been focused on getting the action generation involved, because that is what this movie features: action, action, action. In space.

I love a story that I can build on in my own head. Ones that I can look at and enjoy and really really love, while at the same time thinking "I could make that better."

And that's kind of the vibe I got from the whole movie. Like maybe if they took it back and did a few re-edits -- removing most of the extraneous CGI -- this movie would have been epic. As it is, Lockout is merely popcorn fare, and that's all right.

There was a lot of action, some good dialogue, and some interesting situations Snow found himself in while trying to protect Emilie. He kind of reminded me of Harry Harrison's "Stainless Steel Rat" -- just this incredibly smooth guy able to talk his way past anyone, and he gets beat up and has a bad time, but he always wins through in the end.

I wish there had been more background information on Snow during the movie. Like maybe this movie deserves a prequel (please?) that isn't quite so ridiculous. He was a very engaging character, I could kind of see him as a futuristic Bond-type hero, though not like the clones some studios are peddling.

While it wasn't the best movie I've seen this year, Lockout was incredibly entertaining and I'll be keeping it in my DVD collection for a very long time.

This is Snow, our hero.  An ex-CIA operative that's getting beat up in holding. Why? Because he's been framed for a crime he didn't commit -- the passing on of State's secrets and the murder of his friend, undercover agent Frank Armstrong.

The flashback to events includes a kind of really good fight scene. It was speedy and excellently executed. In fact, most if not all of the fight scenes in this movie were perfectly choreographed punch-punch fighting, quick and straight to the point, none of the posing and extended scenes you get from some of the less quality productions.

This is Scott Langral, the head of the Secret Service. Kind of a hardass, very dedicated to his job -- and he's 100% sure that Snow killed Frank. So he's got no problem with sticking Snow in a freezer box for a thirty year sentence.

This is a man that Snow knows, so there's no doubt why he'd decide to run the minute he thought he was going to be busted. Cue flashback to Snow's attempts to evade capture -- a great chase scene that has him leaping off of buildings, but even has some humorous elements that would totally happen if you were being chased in real life. Stuff that probably hurt him, but that he was able to shake off and keep being The Hero, and a rather humorous one at that.

Then once he's caught, he's caught. He refuses to be helpful and he receives his sentence to Spacecataz, better known as MS One. He's prepped for being frozen. 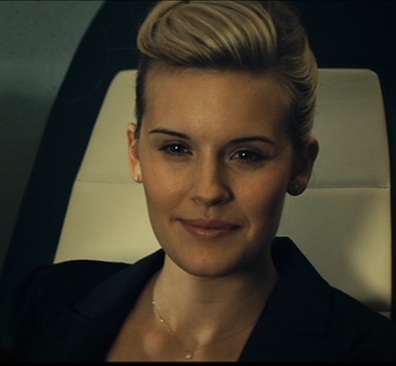 Meanwhile, Emilie Warnock, the President's daughter has taken a humanitarian trip up to Maximum Security One, otherwise known as MS One, or space prison. 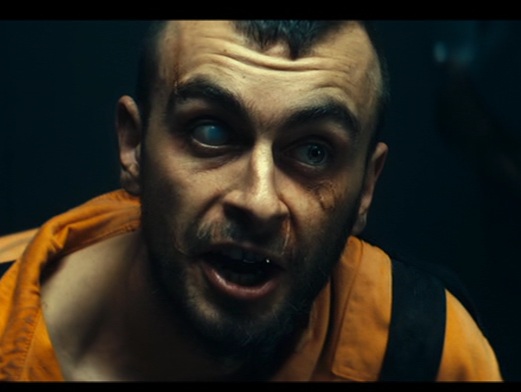 Where she wakes up Hydell to quizz about his prison experience, and that's pretty much when things go pear-shaped.

The prisoner, escapes, all the other prisoners are released, and next thing you know you have the President's daughter hiding from serial rapists and murderers and all the scum of the Earth. It's lucky for her that they're more thug than brain trust, because that allows Snow his opening to come save her and receive a pardon.

From there it's full on action, with some real attention grabbing scenes. Like when he's fighting in the fan.

In all, Lockout was an all right movie. More action than plot and a somewhat implausible middle, but a great choice for someone that likes to see awesome fight scenes and some kind of funny side scenes.  I just wish they had gone lighter with the CGI, like in this scene:

It looks so fake and nearly cartoonish. I had to subtract a big amount of my liking for this movie because of the motorcycle-thing chase. Not the fact that there was one, but because it looked way too over produced. I can only hope that they do a re-edit in the future and fix the crappy CGI, because that would definitely raise this movie up a notch.

But other than that, I give it a solid C on my personal taste scale.
Posted by Unknown at 9:12 PM