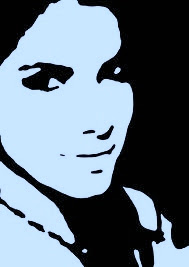 Multimedia is full of talented people.  There are authors and artists that are out there that have produced some really good stuff.  One of those talented people is Ren Zelen.  Ren is an author and reviewer.  She has a book out on Amazon for kindle The Hathor Diaries which you can buy at this link. Amazon Kindle Store Hathor Diaries She also has a website where you can read Pitchfork Red and all her other short stories and its called Lethal Lexicon .  So here is Ren to answer a few questions about her work.

Describe to us about your digital book The Hathor Diaries and how you came up with idea?


I got the idea for 'Hathor Diaries' while listening to the 'Danger Days' album by My Chemical Romance. I was intrigued by the idea of survival in a post-apocalyptic desert world and the possible politics and conflicts of that world as survivors divided into 'tribes' or groups that had different agendas and plans for how civilisation should be rebuilt, and the means they might employ in their struggle for power or supremacy.  Also, I wondered what physical effects the weapons deployed in the 'resource wars' might have had on the worst affected parts of the population - the mutations that might ensue. I wanted the writing to be very descriptive and 'cinematic' and have an element of horror. 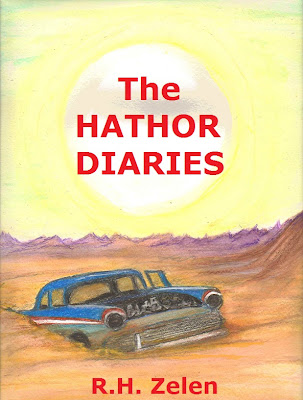 How did Pitchfork Red come about and will it be finished someday?


I plan to finish 'Pitchfork Red' as soon as I have the opportunity to sit down and get on with it. Editing commitments and recent personal events have encroached on my time, but I hope to get around to it soon. The next few chapters are already in my head and I need to get them written down. Besides, I miss my protagonists, I want to see what happens to them myself!

The idea for 'Pitchfork Red' came from my fascination with quantum physics and my love of the 'old school' of sci-fi movies, especially those of the 1950s - I call it a 'quantum Noir' - it has FBI agents and missing women, double-crossing duplicitous characters and night-time car pursuits, although almost everything in the story is not quite what it appears to be at first. Also, I wondered about the possibilities if one could 'surreptitiously' control energy at a sub-atomic level. 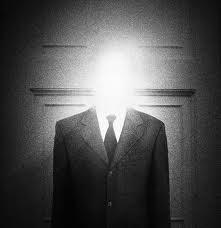 Tell us about your Twitter story Trance Missionz and how it came about and the uniqueness of the different authors?


Trance Missionz is the brainchild of the writer Kneel Downe, creator of the 'Virulent Blurb' site, amongst other projects. He contacted several writers, including myself, and asked us to place ourselves in a scenario of his devising - in this case one where we were sent through 'The Void' to various geographical points on a distant planet. We were then free to tell our stories as we wished, to create our characters and their backstories and the events that befall them on the planet. It is a writing experiment being carried out on Twitter as each of the writers is given a number to represent his or her character and then asked to add their voice to the ongoing timeline. I'm 04, which has special significance for me, as I spent time in China and know a little about Chinese numerology. My number informs the character I'm creating.


I loved Kneel's idea, and it has been a fantastic experience to read the voices of the other writers and see the development of their individual stories. There are some stunningly talented writers involved - they keep me on my toes! It has been a joy for me to discover their work.


What authors have influenced you and have had an impact on the way you write?

I studied English Literature to post-graduate level at university - with all of English literary history as a grounding. I ultimately specialised in Gothic literature and the birth of novel during the eighteenth century. Not sure if those eras actually influenced my writing.


Having said that, I have also been an avid reader of science-fiction and ghosts stories since my early teens. I love detective stories too, starting with Wilkie Collins and Conan Doyle, who shaped the genre. I think reading those stories and watching movies might have had more of an influence on what I write. How I write is a mystery, even to me. I don't know where my characters or their voices come from - they just tend to arrive on the page.


As for the writers I most enjoy and admire - they are many and various: from Daniel Defoe to Thomas Hardy to Austen to C.S Lewis to Angela Carter to Asimov to Philip. K. Dick to Stephen King, and I haven't even mentioned the poets! Oh yes, I suppose I should admit to being a graphic novel reader too - Alan Moore and Grant Morrison mostly.


Do you let music influence your writing? You comment about it a lot on Twitter and seem to have a wealth of musical knowledge if so what musical acts influence or inspire your writing?


Music has always been a big part of my life. The area of Britain where I was born and brought up was heavily industrialized. It's called 'the Black Country' and is credited as the place where Heavy Metal music originated, so I grew up listening to that and  Rock Music. I was never much interested in the 'pretty boy' bands of pop. When I was a teen I wanted to be the first female Rock Guitarist, but I hated the way my fingers bled after performing and loathed the idea of 'touring' so it was never going to happen!


Even as a little kid, I used to make up movies in my head while listening to music, and it persists as a source of inspiration for me. It may be the atmosphere that a song creates, or a clever turn of phrase in a lyric that jumps out at me and begins to ferment something in my imagination. Some music is clearly intended to create visual pictures, Dylan, Bowie, Kate Bush and Springsteen are obvious examples. Elvis Costello is a phenomenally powerful lyricist. Jack White has a broad musical palate and a quirky way with words. Underrated too are David Sylvian, Eddie Vedder, Michael Stipe, Gerard Way,  Julian Casablancas, Alex Turner, Pete Wentz, who all have an individual style and come up with vivid phrases and striking verbal imagery, but really, anything in a song might spark something in the imagination. I've always listened to a lot of different kinds of music. 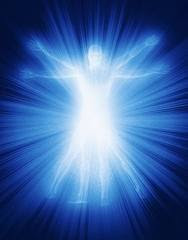 You also review Sci-fi and horror books, movies and shows.
Which genre do you enjoy the most and enjoy reviewing?


I don't have a preference. I just like to see something that is well conceived, well written and has some originality and visual flair. I've been known to review other genres too. I reviewed all three episodes of season 2 of 'Sherlock'. I'll probably review the next series too!


When reviewing horror novels I can draw on my background in Gothic literature - I find that very useful. If reviewing movies or shows I draw on the fact that I've been a devoted movie watcher all my life. I admire a well written script,  be it a Marx Brothers routine or a screwball comedy of the 1930s, a 'noir' movie of a Raymond Chandler book or the visual imagination and storytelling of Ridley Scott's ventures or Christopher Nolan's films.


Besides your website where else can we find your writing and reviews?


Way back when, I had some stories published in anthologies, under different names, but we shall draw a veil over them! I was a struggling post-grad at the time and needed the practice. Afterwards I had a long hiatus from writing anything lengthy, as I worked for an American magazine in Hong Kong, moved into academia and academic publishing and concentrated on my family life.


When I had more time and a computer to myself, I started writing again and found a vibrant artistic community on the web. The immediacy and feedback that the web provides is a much more dynamic environment for a writer. Conventional publishing can't offer that, although it can offer a marketing department, which is something I'm really bad at myself!


I still edit on a freelance basis for my previous employer, but the landscape of publishing is changing as more writers take control of their own work and how it's made available.


What have you coming up or plan to do in the future?

First of all, I shall finish 'Pitchfork Red', then consider the next writing project. There are several potential stories. I'm thinking of maybe creating a warped, darker, more ambivalent version of 'Beauty and the Beast' which has always struck me as a highly questionable tale. It may be timely to examine the ideas of moral responsibility and aesthetic convention.