Do all writers have insomnia?

Or does insomnia give rise to writers?

This is sort of like the chicken and the egg thing isn't it? :D


﻿﻿ ﻿﻿
I've read posts on Facebook, blogs, and even Tweets on Twitter where authors speak of their lack of sleep, early hours to make time to write, inability to fall asleep, even waking up in the middle of the night to jot down so juicy tidbit that leaked through their subconscious into their conscious mind.
It seems as though authors, in some form or another, suffer from lack of sleep. Now, sometimes this comes as a choice they make. When it comes to juggling a full time job, kids, and finding time to write, often times this leaves only the late night hours or the wee hours of the morning. And some authors even seem to do their best work in these quiet, secluded hours.


Now, I bet you're wondering, "Does Dr. Fab suffer from insomnia?"

The answer is...well...sort of.  My issues with sleeping are a little different and unique (well, maybe not so much):


1) I suffer the often frustrating condition known as tiny bladder syndrome (okay, I made up that name but it fits). It runs in my dad's side of the family. Our bladders stopped growing when we were little. As we aged, we had an adult need for fluids and a child-sized bladder. Are you seeing the conundrum? Well, I know have to get up at least twice a night to pee. And sometimes three or four times. The whole "Adults need eight hours of sleep a night" doesn't cut it for me. I need at least nine or more because I don't sleep the whole night. While falling asleep is easy (once my head hits the pillow, I'm out), I wake up about every hour or two. *sigh*


2) In addition to the wee bladder, I also suffer from night terrors, something else I have suffered from since I was a child. My mom remembers several occasions where I would wake up completely freaked out, or scream out in the middle of the night. There were plenty of times where I would physically walk around, eyes open, still in the dream, talking nonsense or even running in terror from something in my dreams.


Now, the nightmares coupled with the waking up every few hours means that unlike most people I remember at least three dreams every night. And not just bits and pieces. I can recall every detail. Sometimes they are so garbled that they don't make much sense but some are actually quite realistic. Sometimes I think about these dreams all day, chewing over them, trying to find some hidden meaning.


Which is where the idea for the Portals of Destiny series came from. 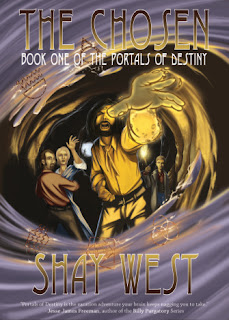 I remember the dream as if it was yesterday. So vivid, so real! I thought about the dream all day at work, trying to answer questions about the man and enormous mechanical being landing on his world. Was it friend or foe? Was he the hero of the story or an innocent bystander? The more I thought about the dream, the more I began answering some of these questions. It was my dream after all! Before I knew it, I had not just an idea for a book, but an entire series. It was intoxicating!


The dream doesn’t manifest until the second book which will be titled Shattered Destiny. The front cover will be the dream I had. Pretty wicked awesome to see it in vivid color as a book cover!
Posted by DR5WHO at 7:53 AM