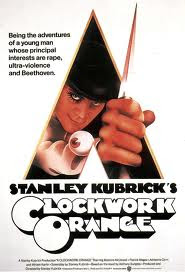 Review of the movie and Blu Ray release

Last year I worked on my top 25 Sci-Fi movies of all time and said then that my top lists tend to be fluid and constantly change.  This change is based on recent viewings of movies that I have seen before as well as new releases.  During the posting of my list I changed it a number of times and found up to this point several movies that perhaps should have been on that list but weren’t.  A Clockwork Orange may be one of those movies. 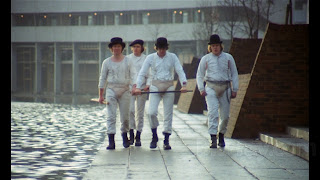 Is this really Sci-Fi?  Well, it is supposed to take place in the near future and the techniques in conditioning can be considered science fiction to a degree.  One could argue that the movie is not Sci-Fi but the entire look and feel of the film is so ‘off’ that it just seems not to fit into a contemporary formula.  From the language used, the spartan sets and imagery that Stanley Kubrick uses in the film, there is certainly an original feel to it that keeps it away from many other movies.

I had seen the film a few times years ago and recently took advantage of a pricing mistake on the 40th Anniversary Blu Ray edition of the movie.  It had been a while that I had seen the film and when I did see it years ago it must have been edgy, almost naughty to see such a controversial film.  With plenty of sex and violence this is one of those films that as high school or college age kids would gravitate toward. 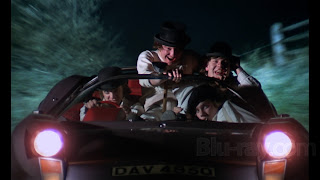 My memories of the film had been pretty clear and so while watching it again it all came back to me.  Still, I found several scenes I had forgotten about (including most of the prison stuff) so it was good to see the film again.  My tastes have changed and I am not as swayed by controversial films or movies that put in shocking imagery to provoke certain reactions.  As a matter of fact I felt A Clockwork Orange has become more realistic and less sci-fi in these recent years and the violence not as big of a deal.  Of course the way the violence is shot is the difference.  The movie is not realistic but more stylized and so these shots are more focused and on display for the viewer to comment on.  Everything is set up as if on stage and in fact several scenes take place on a stage. 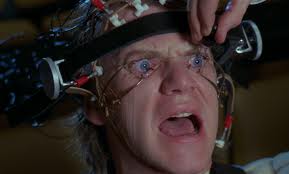 What I found impressive now as much as I had back years ago was the power of the music.  Certainly music has a huge role to play in the movie but the incidental music is haunting and hard hitting.  I appreciated the filmography and Malcolm McDowell’s performance even more so this time out.  I was also impressed with two torture scenes (Alex being drowned in the troth and Alex’s eyes being held open during his reconditioning) with the knowledge that these scenes were real as filmed and dangerous.

This movie is a common inclusion with Sci-Fi lists and perhaps if I had watched this last year before I made my list I may have placed it.  Years ago I might have put it high on the list to show that I was edgy and could appreciate controversy but now I see more of the style and more of the commentary on society that author Anthony Burgess expressed. 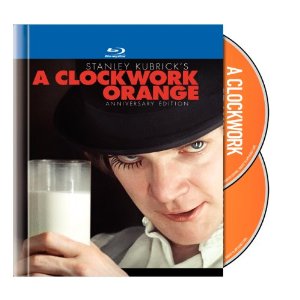 The Blu ray is impressive with a fair amount of mini documentaries mostly talking about the reaction to the film and the pulling of the film due to pressure from threats made on Kubrick’s family.  Like 2001: A Space Odyssey, A Clockwork Orange thrives on the high quality HD format of Blu Ray and this beautifully shot film looks even better.

This edition of the Blu ray includes a little hard cover booklet with lots of photos and such.  There is a second disc with two documentaries on it.  One is about Stanley Kubrick’s life and the other is about Malcolm McDowell’s life.  I have not see either of these yet but will probably give the Kubrick one a look soon.

I was impressed with how this film stands up after all these years and enjoyed it nearly as much as I did the first time I saw it.  The film has so many levels and is perfectly paced.  To feel bad for a character as vile as Alex is the work of the writing and acting.  It is not a film for everyone but it should be on everyone's list to watch.
Posted by SHADOKP at 12:29 PM