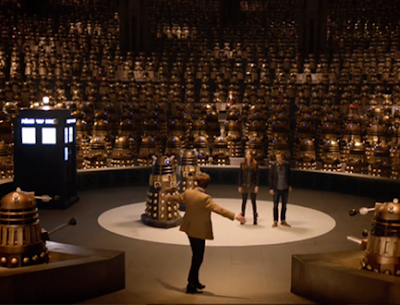 Today at the BFI screening it was announced that the start of Series 7 of Doctor Who will start on September 1st 2012.  The time of day hasn't been announced yet but it is probably a good guess to say between 6 and 8 PM BST while it will air on BBCA around 9PM ET where it has aired before.

UPDATED
Even though several Doctor Who pages are carrying this story nothing official has been released yet.  Even though it was confirmed at the BFI the BBC has yet to announce this officially and they could change their minds.
Posted by DR5WHO at 4:11 PM

Email ThisBlogThis!Share to TwitterShare to FacebookShare to Pinterest
Labels: Asylum of the Daleks, doctor who, Doctor Who air date, Doctor Who Series 7, Doctor Who start date