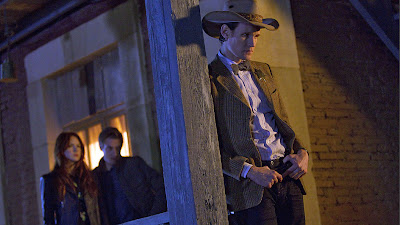 Category: BBC One; Drama
Head writer and executive producer Steven Moffat gives us an insight in to the monsters and adventures that we can expect from the new series.

So it is back with a bang and with Daleks from every decade. Why did you decide to kick-off the new series with a Dalek filled episode?
We've been off the air for longer than usual, so it was an easy decision to come back with Doctor Who at its most iconic and that means Daleks. Lots and lots of scary Daleks.
There have been many monsters to face the Doctor over the years, but only one that can sum up the whole series just by being there.
Also, it's my first go at writing for them. I LOVE the Daleks, and I've held off till now. But I had what I thought was a good idea, and couldn't resist any longer!!

What else can we expect from the new series?
We have, I think, our biggest range of stories EVER. We've got the return of the Daleks AND the Weeping Angels - both of them poll-topping Doctor Who adversaries - in cracking new stories, we've got Dinosaurs on a spaceship (it's what you've always wanted), we've got a glorious western with a Cyborg Gunslinger, the most unusual invasion Earth story EVER, and location shooting in New York for the Pond finale.

Are there any new monsters to look out for and star guest appearances?
There's a terrifying Cyborg in the old West, and wait till you see what's invading Earth in episode 4. There's never been an extra-terrestrial incursion like this one!! Guest stars include David Bradley, Rupert Graves, Stephen Berkoff, Mike McShane, Ben Browder, Adrian Scarbourgh and Anamaria Marinca.

As well as filming in and around Cardiff, you ventured abroad to Spain and New York for episodes 1, 3 and 5. What was it like to shoot in those locations?
I don't think I've ever worked on show before that's had foreign location shoots on three out of five episodes - it's quite astonishing. We have snowy mountains for the series opener, New York for the finale and along the way a full-blooded Western shot on location where all the best cowboy movies come from - Spain. Location shooting at this level is such a blast of fresh air for the show - wide open spaces and wide open skies! It's easy to say "movie scale" but that really is what we're delivering.

We know to expect Amy and Rory's departure in episode 5, why was it decided that this should be the time for them to go and with an episode featuring the Weeping Angels?
The story of the Ponds hasn't even begun to end yet - they've got loads more adventures with their mad friend the Doctor ahead of them, and we'll see more of their lives and Time Lord-complicated relationship than we ever have before. This more than any other, is the year of the Ponds.
But, yes, it's true, I cannot lie - somewhere out there, the Weeping Angels are waiting for them...

What are you going to miss most about the characters and Karen and Arthur?
Amy and Rory have been with the Doctor since I took over show, they're part of the landscape for me. It was just traumatic to consider a future without them. Amy is everything I admired (and sometimes feared) about strong, clever, reckless women, and Rory is the man I'd like to be - so strong he never has to show it.
Karen and Arthur have become friends, and I still can't get my head round the fact that I'll never find them on the set again. Brilliant performers and warm and lovely people - the best of the
Posted by DR5WHO at 8:30 AM