Doctor Who Press Round Up From BFI Screening 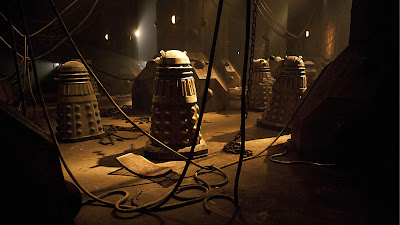 Here is the press round up that was reported by Den of Geek. Included in it is some pretty interesting news.


The running sequence of the new series will see a first block of five episodes transmitted, then a break, then the Christmas special, then a break, then the last eight episodes in the spring. That’s generally what had been suspected, but it was confirmed at the event.
The Christmas special, which is currently shooting, is set in Victorian times, revealed Steven Moffat (after conferring with Caroline Skinner).
The title sequence to the show has undergone a slight evolution.
There are plans, but nothing concrete yet, for more live events to coincide with the 50th anniversary of the show next year. In particular, Caroline Skinner cited the Proms, although she didn’t indicate that a new one was coming.
Mark Gatiss has been wanting to do his upcoming drama on the creation of Doctor Who, which is set to be broadcast in 2013, since before the show was revived in 2005.
Reports that Matt Smith has signed a new contract to 2014 are news to Matt Smith. In his own words: “It sounds like you’ve signed something else, when in fact I was always going to be around”.
Of the episodes he’s written, Steven Moffat’s least favourite is The Beast Below (although there are ideas in it he likes very much). The one he’s proudest of (even if you don’t think it’s his best, he says) is The Eleventh Hour, given just how much ground it had to cover in one hour of television.