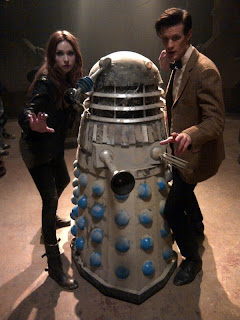 There is some confusion out there on when the latest season of Doctor Who will air on BBC America.  Early  thought was that it would air the same day as in the UK - September 1.  A keen eyed fan spotted a BBC America commercial that stated the date was September 8.  This has caused an uproar with fans as BBC America has yet to officially announce their date.  Some say the ad is fake (which it isn't).  So it is possible BBC America aired the ad by mistake or that the add was in error.  Either way, the official announcement should be this week.
Posted by SHADOKP at 5:02 PM