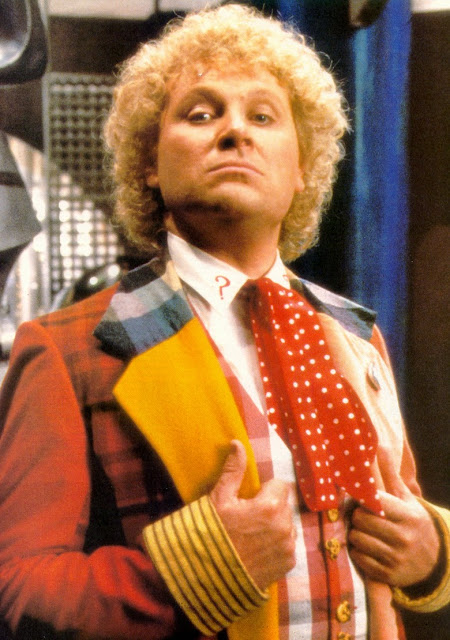 Unfortunately Colin Baker’s tenure as The Doctor wasn’t that long to warrant a top 10 list.  Being unceremoniously fired after The Trial of a Time Lord Colin’s Doctor wasn’t able to build a big back catalog of stories to pick from and he only had 11 stories so in fairness I picked the top 5 from his era which is often overlooked and has some really good stories in it. 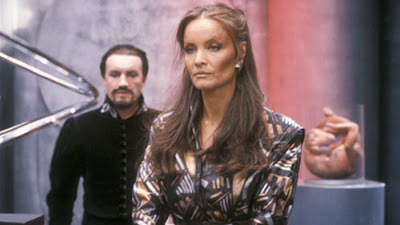 5. The Mark of the Rani
Written By Pip and Jane Baker
Directed By Sarah Hellings
Why It’s In The Top 10:
It’s a fun story that pits The Doctor against two renegade Time Lords.  We get to see the return of The Master and the first appearance of the Rani.  This double act worked so well together that seeing the two villains trying to outdo one another makes the story pretty entertaining and the chemistry between them really does work well.   Plus it has one of the funniest scenes in it ever when the tree saves Peri. 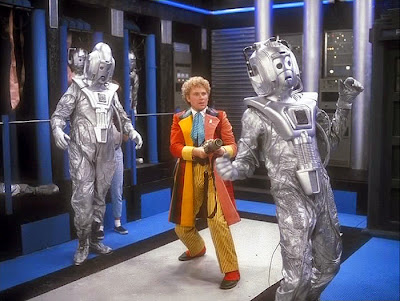 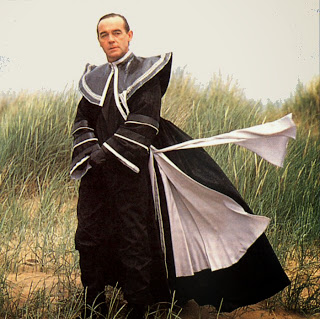 3. The Trial of a Time Lord
Part 13 -14 The Ultimate Foe
Written By Robert Holmes and
Pip and Jane Baker
Directed By  Chris Clough
Why It’s In The Top 10:
Well it is the story where we find out that The Valeyard is really The Doctor.  Imagine the shock and surprise at the reveal of this mind blowing revelation.  Way before The Name of The Doctor did it with the John Hurt reveal we were treated to this plot twist that kept Who fans talking for quite a while and made it worth trudging through the whole mediocre Trial season.

2. The Two Doctors
Written By Robert Holmes
Directed By Peter Moffatt
Why It’s In The Top 10:
It is pretty obvious why The Two Doctors is on the list.  You have the return of Patrick Troughton and Frazer Hines as The Second Doctor and Jamie and it is as if they had never left the show.   It is good to see The Sixth Doctor interacting with his past self after searching and rescuing him.  One of the funniest scenes is when The Doctor is turned into an Androgum and goes out to eat with Shockeye.  Patrick Troughton was marvelous in that sequence. 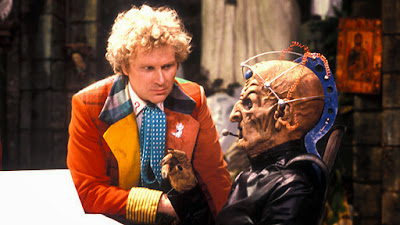 1. Revelation of the Daleks
Written By Eric Saward
Directed By Graeme Harper
Why It’s In The Top 10:
It is one of the best Davros stories in a long time.  The Daleks are seen mainly in the background and do not have a big presence until the last half of episode 2.  Revelation of the Daleks has some pretty interesting characters in it which make watching this story even more enjoyable.  Davros has come up with a pretty good scheme using people to make a new breed of Daleks while using the dead bodies as food protein to help stave off the famine in that part of the universe.   It is also one of the best performances by Colin Baker and Nicola Bryant.  You can really see their chemistry gel and it is too bad that they were not able to continue longer.
Posted by DR5WHO at 11:00 AM

Email ThisBlogThis!Share to TwitterShare to FacebookShare to Pinterest
Labels: 50th anniversary, 6th Doctor, Attack of the Cybermen, colin baker, doctor who, Revelation of the Daleks, The Mark of the Rani, The Two Doctors, The Ultimate Foe