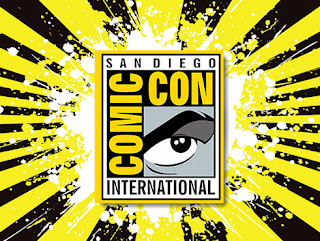 Its that time of year again.  Its time for the San Diego Comic Con that big gathering of geeks that happens every year as tons of people line up for hours to see panels and celebrities.  Warner Bros has announced who they are bringing to San Diego on the TV side of things.  So here is who and when your favorites from Warner Bros. will be there.

MAD (Mondays 8.30/7.30c Cartoon Network): Get a glimpse behind the MADness with MAD television producers Kevin Shinick and Mark Marek.

The Big Bang Theory (Thursdays 8/7c CBS): In a panel sure to be filled with debate and discussion - and more than a few surprises - executive producers Steven Molaro and Bill Prady and the writers of The Big Bang Theory take fans behind the scenes of TV's #1 comedy.

The Paranormal and Extraterrestrial Squad (coming soon, CWTV.com): Join producers Milo Ventimiglia (Heroes) and Russ Cundiff and creators/stars John Dale and Michael Hobert as they introduce a new digital series about the misadventures of a ragtag group of ex-community college students searching for paranormal and extraterrestrial (PET) activity.

Person of Interest (Tuesdays 10/9c CBS): Executive producers Jonathan Nolan and Greg Plageman join members of the cast for their third visit to Comic-Con. (You're being watched.)

Beware the Batman (Saturdays 10am ET/PT Cartoon Network, premiering July 13): The Dark Knight makes his return to television in this new action-packed CG animated series. Producers Glen Murakami and Mitch Watson will give fans a peek behind the cape.