Defiance – We Are All Aliens, After All By @MAntoniaP 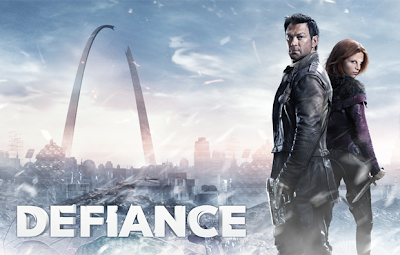 Defiance – We are all Aliens, After All
By Marie Parsons
Defiance is the new name of the city once known as St Louis. The series starts out 33 years after eight alien races, part of the Votan collective, came to Earth to find a new home.  In the early episodes, all that viewers know is that the inhabitants of Defiance include humans and several groups of aliens: the white-haired humanoid Castithans, the bald-headed humanoid Indogenes, the small scruffy and hairy Liberata, and the large orangutan-like Sensoth. The Irathients used to live with Defiance, but a fierce culture clash resulted in bloodshed, and those aliens now live in the badlands as scavengers, occasionally coming into Defiance to trade. Occasionally an Irathien may exhibit visionary talent.

Along with the mix of cultures and peoples, Defiance faces pressure from a political entity known as the Earth Republic. There seems also to be an organization called the Votanus Collective, based in Brazil. Also, unbeknownst to the citizens of Defiance, one of their own has attempted already once to arrange for the city to be attacked by the warlike alien Volge. Fortunately, that attack failed. But more chaos is intended, as a search for strange alien artifacts is underway.

All the elements of a good, classic science fiction story are thus here. The basic plot may seem familiar—and certainly has been tried on television several times before. Earth has been changed by an alien incursion. Some aliens co-exist, others do not. Some humans are out for their own agendas, and don’t care if they sacrifice alien or human along the way.

Perhaps the strongest aspect of this story (setting aside its parallel appearance as a multi-player game) is that it treats aliens and humans as no different under the skin while still making clear that the aliens are indeed aliens. It is not that the aliens act so much like humans that they may as well be. In truth, sometimes humans act far less like humans than even some of our familiar animals well may do.  The aliens retain their alienness, even while exhibiting what seem to be human ambitions, fears, and stupidity.

When Datak Tarr, the leading Castithan, provides help to the human mayor, in return for a seat on the council (such a human bargaining ploy) one cannot help but be chilled at the thought of this strange alien having a voice in a place where humans still hold sway.  After all, his people wanted to punish cowardice of one of their own with a horrible and painful torture—calling it purification did not change that.

So what makes this work then so well as a science fiction story, if the aliens show qualities we humans can easily recognize and to which we can relate. Our biggest fear, sometimes, is of the alien other. When aliens invade in the classic stories, they are always monstrous, with agendas we can never understand and weapons against which we can never succeed. When humans and aliens clash, the two are always so different that even if peace comes about, it is a distant peace, requiring nothing but the acknowledgement that the other exists. 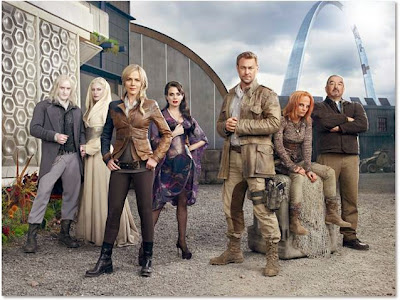 In Defiance, however, aliens and humans are forced by shared, common, circumstance-loss, a world destroyed and changed around them, and hope-to build something where they simply all can be safe.  The Earth Republic won’t distinguish between alien and human, nor will the Volge invaders should those ever return. There is no luxury to finger-point and simply say “the other is different, and therefore must not be allowed to remain amongst us.”  Co-existence in Defiance, while perhaps quiet, is not without its daily tensions.  Tension may exist as likely between humans, between aliens, as between humans and aliens.

Defiance takes place in a world, different from our own, and yet, a world familiar in the need to find a way to survive and live together. Defiance is not really a story about humans having to deal with aliens—although the danger of further invasions and incursions (from both other aliens as well as other humans seems ever-present.  Defiance is about vastly different “peoples” who must find a way to navigate treacherous waters if they are to survive at all. The “aliens” must deal with humans, as must the humans with the aliens.

In Defiance, everyone is an alien, living together in a strange dangerous world.
Posted by DR5WHO at 7:17 AM

Email ThisBlogThis!Share to TwitterShare to FacebookShare to Pinterest
Labels: defiance