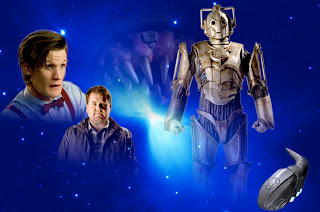 Doctor Who is running out of time. He has only two more episodes to save the season. Can he do it with the help of Craig in “Closing Time”? 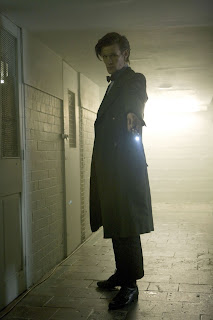 I am expecting a mess next week in Doctor Who and so I was hoping this story would be the series' last gasp of excellence before we are thrown back into the world of River Song and eye patches and convoluted story telling. “Closing Time” certainly has a good pace and simplistic story that focuses on the issue of the Doctor not only ready to accept his upcoming death but still believing that his interaction with people and companions eventually endangers them and makes their lives horrible. Craig and his baby son make some good points but alas, the Doctor is still in the dumps and ready to accept his fate. 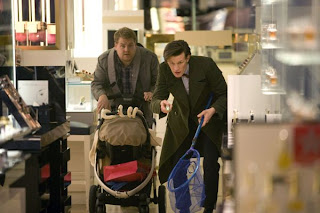 There is also a story in this one. A crashed Cyberman ship is draining power from the neighborhood and the Doctor gets a job as a clerk at a store in order to investigate. He discovers Cybermen, who are planning to restore power to their ship and build an army to take over the planet. It is Craig's love for his child that wards off a cyber-conversion and causes all the Cybermen to explode, yet again proving to the Universe that the Cybermen are pretty easy to kill. 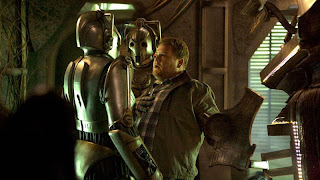 The idea is pretty good, a Cyber-ship lying dormant for centuries and finally having enough power to be a threat and detected by the Doctor. The whole “human emotion” defense in stopping the Cybermen is interesting and yet one has to wonder after all this time that Craig's emotion was the only human to ever break the Cyber-conversion in the history.

This brings up the fact that I have generally disliked the way conflict with the enemy is resolved in Doctor Who. Usually there is a quick fix or an easy out. If you are going to write such a tough story for the Doctor to resolve, your answer has to be just as logical and satisfying. These cop-outs are ignored by many viewers for the most part because the Doctor does manage to resolve it with a smile and wink. The producers ramp up the editing speed and throw in tons of characters and plot lines and the viewer will often not see or care about the resolution because the Daleks were in it or Sarah Jane re-appeared or we learned that Captain Jack was the Face of Boe, etc. I expect the same for next week unfortunately.

Anyhow, my other complaint about this story is the music. Murray Gold does great action and suspense music. I dislike with a passion his “funny” music which is very juvenile and silly. When the Doctor meets up with Craig is an example of this loud kooky music that is present in many episodes. There was a lot of it in this episode. I have trouble taking the episodes seriously which I know many fans don't care to. 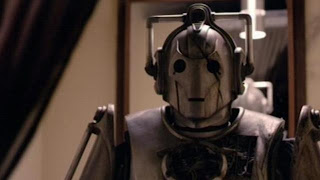 With all that said, I know that when the dust settles for this season, this may be my fourth favorite story. I did like the relationship between the Doctor and Craig. The concept of love beating out the emotionless Cybermen is a worthy concept even if it is a bit of a cop out. The return and new design of the Cybermat was well done. I am dreading next week's episode even more after seeing the lead in to this story and next week teaser. Its Kitchen sink time!!!
Posted by SHADOKP at 10:23 AM

Email ThisBlogThis!Share to TwitterShare to FacebookShare to Pinterest
Labels: doctor who, doctor who closing time, review