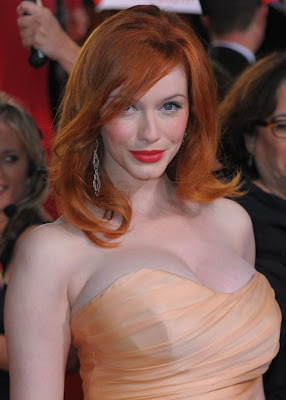 Danish director Nicolas Winding Refn has made no secret of the fact that he would like to direct a Wonder Woman movie. His choice for the lead role? Christina Hendricks of "Mad Men." They worked together on his current release, "Drive."


Sure! I grew up on the TV show, and I had Wonder Woman Underoos, and my brother had a Wonder Woman doll — sorry, Aaron, you're exposed. [Giggles.] And Nicolas said, when we were on set (for "Drive,") "I want you to be Wonder Woman." And I think he is such an extraordinary and exceptional director, that if he asked me to do it, I would do it in a heartbeat.


Other excerpts from the interview:


Funny enough, when Joss Whedon was going to direct Wonder Woman, you were one of the people he was considering ... so you've got two directors who think you're right for the role.
I'd like to think that Joss would have cast me! I also loved working with Joss [on Firefly]. I'm excited to see what he does with The Avengers. Hopefully the stars would align [for Wonder Woman]. It would be really fun. It would be cool, wouldn't it? I'd get to kick ass.

Would you want your Wonder Woman to be that kind of dark, sexually liberated character? Bring back the bondage?
Well, I would certainly do what Nicolas wanted to do, and I can only guess what his version would be, but as I grew up with and am now married to a comic book fan, I think it's important to be true to the original comic books, because I know that the fans love every detail and it's very important to them. So I think it would be cool to do that. I look forward to learning more about it, actually. I should probably start reading them, so that if someone were to ask me [to be in the movie], I would be fully prepared. [Grins.]