Titan Comics has announced its comic book event for their Doctor Who comics day.  This is the second time they have done this as last year they released their 10th and 11th Doctor comic books and gave away San Diego Comic Con exclusives.  No word on merchandise yet but they have released the covers for a five week mini series featuring four Doctors.  We know three of them but the fourth one is a mystery.

5-part weekly event written by Paul Cornell and illustrated by Neil Edwards, stars Tenth, Eleventh and Twelfth Doctors and their comics companions!The weekly event, running through August and
September 2015, in place of the ongoing series, features all three Doctors from Titan’s regular ongoings. This epic event is the thrilling next chapter in Titan Comics’ bombastic Doctor Who publishing saga.

Writer Paul Cornell has penned classic episodes from the Doctor Who TV series (‘Father’s Day’, ‘Human Nature/Family of Blood’, both Hugo-nominated), classic Doctor Who novels, as well as successful comic book runs on titles such as Wolverine, Action Comics, Demon Knights, and Captain Britain and MI:13.

The e​vent follows straight on from the issue #15 conclusions of Year One, with the second years of the Tenth, Eleventh and Twelfth Doctors beginning after the event’s blistering finale! 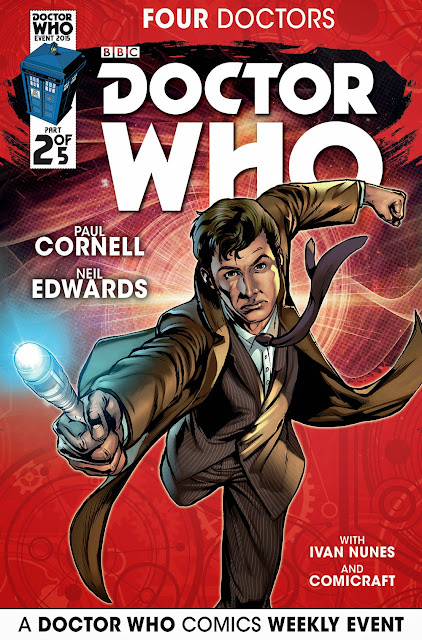