Doctor Who - An Ordinary Life Review 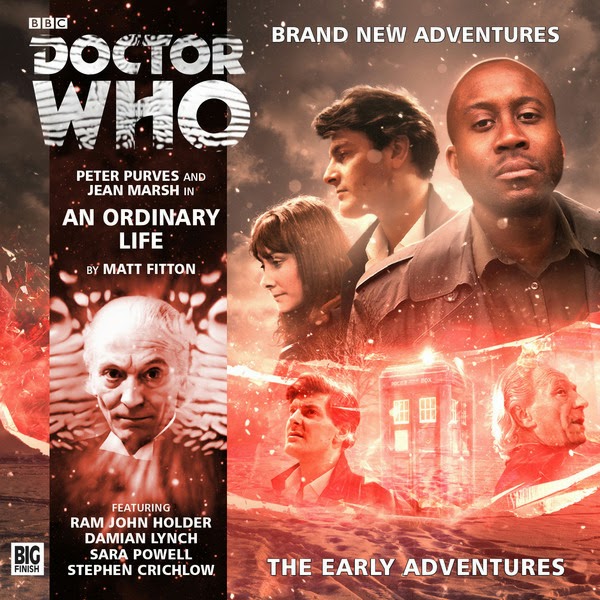 While escaping from the Daleks the TARDIS makes an emergency landing in London in the 1950’s. Steven and Sarah rush over to The Doctor who has collapsed.  They go outside as the TARDIS more or less has pushed them out to save them from what is caused it to make the emergency landing.  Out in the cold and snowy streets of London Steven and Sarah find help and shelter from Joe and Audrey. Joe and Audrey are immigrants from the Caribbean and struggling to make a living with a new born and the constant racist harassments.  But despite all that they take the three travelers in and help them out.

Steven and Sarah end up renting the room above Joe and Audrey because it doesn’t seem like The Doctor will be recovering soon and with the sudden disappearance of the TARDIS it appears they may be living in 1950’s London for a while.  So they end up settling in getting jobs and enjoying the trials of everyday life and enjoying the break from being hunted by Daleks.  But soon things seem to change as the people in the neighborhood seem to change as their personality is way different than what it is before and Steven ends up finding out that something alien is roaming around and an invasion is taking place right in front of them.

I really liked An Ordinary Life.  It gave us a different take on two of the first Doctor’s companions.  More so for Sarah Kingdom as most of her stories in The Dalek Masterplan are missing so we do not really know much about her.  What was really good about this story is that we were able to see Steven and Sarah live a normal life while waiting for The Doctor to recover.  We see Sarah and Steven having to cope with cooking and buying groceries in the 20th Century.  It was funny seeing the two companions from Earths far future trying to cope with something that is primitive to them but normal for us.  It was strange seeing Steven getting a job but he had no choice as they needed money to pay the rent and to buy food.  What was funny was that Sarah tried to get a job with the police department.  Remember this is the 1950’s and women were not working in the police department. So when she showed the men her credentials it didn’t work out all that well with the guys in blue all unconscious.

What also made this story intriguing is the way they handled the racism of the time.  Steven and Sarah befriended a family from Jamaica and were branded as sympathizers and were thus included into the harassment of the others.  It went as far for Steven to lose his job over it.  This story gives us a reminder that our past was not all rosy as the history books make out.  This would be a good story for people to listen too to get a feel of how it was for foreigners back then and unfortunately is now being repeated.

An Ordinary Life does have a science fiction aspect to it.  It happens towards part three and is cleverly added to the story.  There is an alien race that relies on cloning its victims and like the Zygons it needs the host alive to keep the print.   It is a pretty clever way that The Doctor stops them and I was pretty entertained with the outcome.  I’m not going to give much away as you need to listen for yourself.

An Ordinary Life was a great story that shows us a different side of two companions from the First Doctor era and I would welcome a few more stories like this from Big Finish.
Grade A