Marvel vs. DC - Avengers: Age of Ultron, Batman, Death of Superman, Flash, Suicide Squad and the problem with Female Superheroes

This imaginary battle is heating up both on TV and in movies. While DC has been sluggish in getting going, Marvel is hitting the target with The Avengers: Age of Ultron. DC is fairing better on TV but Marvel is gaining some momentum. 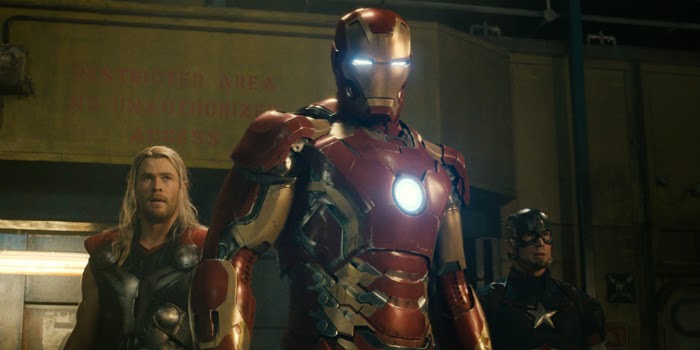 The Avengers: Age of Ultron – I finally saw this and it was pretty amazing. I feel I must see it again because there was so much take in. New characters, several plots and so much else, the movie is cluttered and with scenes cut, like with Loki and so forth, one has to wonder if Marvel did not miss an opportunity to split this movie into two parts. Still, there is much to love about the film and I felt it fit perfectly into this universe. My brother and I did agree that there was a missed opportunity with SHIELD and the lack of any connection with Agents of SHIELD. Why couldn't Coulson and others from that TV series had made a cameo on board the Helicarrier is beyond me. It would have been the perfect time to deal with it and to plug the series.

With so many plots going on, it was hard to figure which ones could have been left out and again, I feel something should have been put back into the film.

Of interest to me was how the story went out of their way in dealing with The Avengers saving people. It was a big part of the film and it seemed to me almost a reply to DC's dealing with death and destruction in Man of Steel where thousands are killed with little notice. The danger of any film where super heroes are battling in a city or a bad guy is targeting a city is that people are going to die.  In The Avengers, the damage was downplayed, in Man of Steel, the damage was massive and ignored and in The Avengers: Age of Ultron, they went out of their way to save people BUT it was still Tony Stark's fault. He made weapons for a living, created an AI that kills many and is indirectly responsible for Scarlet Witch altering the Hulk's mind which results in another inner city battle.

Captain America is really mad at what Stark did with the AI and I thought the end result would be the seeds to their divided agendas in Civil War. Instead it was glossed over a bit.

Beyond that and wanting to see more of the story, the movie was incredible and I want to see it again!

Agents of SHIELD –  I have been on the DC bandwagon when it comes to television but with Daredevil doing well and going to a second season and now what Agents of SHIELD has been doing of late. I am beginning to really love this series. They are hitting all the right notes right now, trying to erase the slow start in season 1. I keep hearing people stating that they heard this show was bad and have to imagine that most of the people who don't watch this gave it a chance at the start, gave up and will never go back. What a shame. I love the whole Inhumans aspect of the series now and am very curious on how they are going to deal with this in the future. No word on a season 3 yet but, come on! 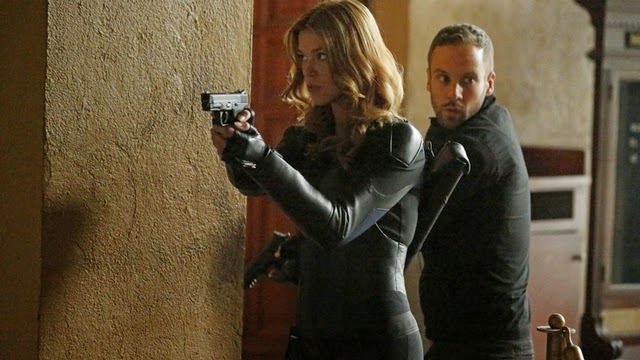 Agents of SHIELD spin-off – A couple of rumors I read about. First off, a Mockingbird spin-off seems interesting but not as much as Agents of SHIELD. I also like the idea of an Agent Carter series which deals with Sharon Carter (Peggy's niece) and Peggy in a flash back, present day double team. Well, we can only hope.  Could they do an Inhumans series like an Inhumans school where people learn of their powers?.  Perhaps.

My problem is that Agents of SHIELD is not doing that well in the ratings. It is okay but diluting the product more with a spin-off may not yield a better product. Still, Marvel knows what they are doing and they will milk it for all they can and I will watch every moment! 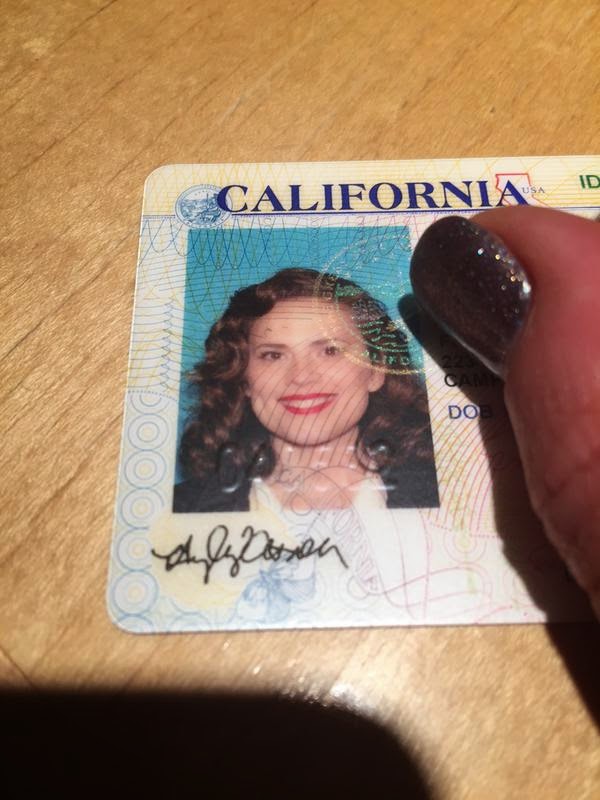 Hayley Atwell is so cool – I don't follow too many people's twitter but I should follow Hayley Atwell (Agent Carter). Not only did she tweet a picture of herself at the airport waiting area where a TV was showing Captain America – First Avenger (and no one recognized her) but she also had her license photo taken as that same Marvel character. 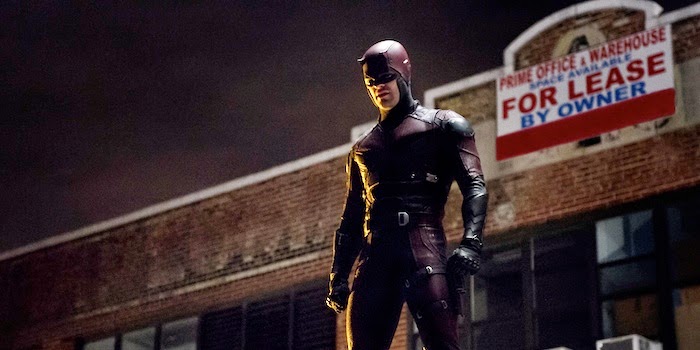 Daredevil Series – So I have not watched all of this series yet. No time. I did watch four episodes and will watch the entire series with my wife once the current TV series is over in a couple of weeks. The series looks pretty fantastic and I am glad to hear it was renewed for a second season. This gets me more interested in AKA Jessica Jones and other potential series Netflix and Marvel have in the works.

Batman Vs Superman - well, the first teaser is out and I like the look of it.

Suicide Squad – DC has been quiet with its movies and beside the trailer of Batman vs Superman, the only real movement has been promo shots from The Suicide Squad. I have nothing bad to say about this. 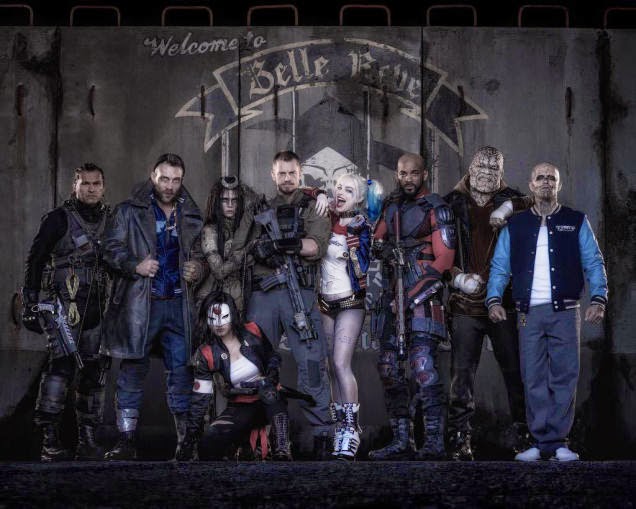 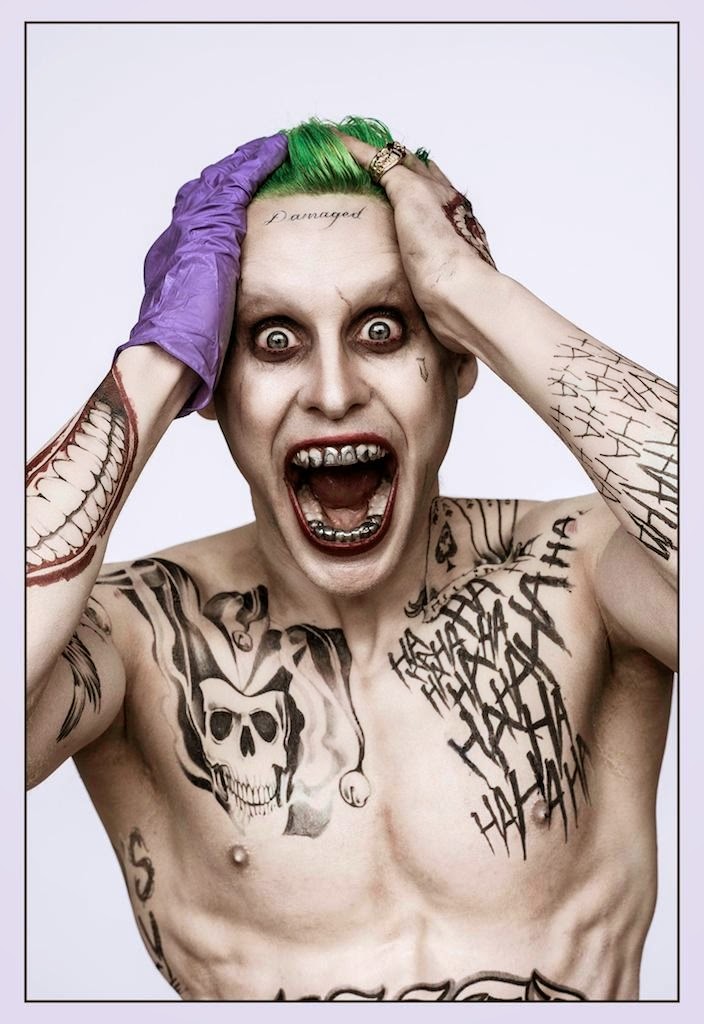 It is certainly a different take on The Joker and this video below points to the design weaknesses but I need to see him in action. Jared Leto has a lot to live up to with Heath Ledger's Joker immersed in our consciousness. 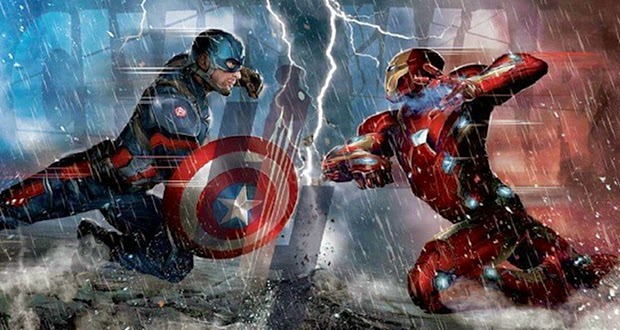 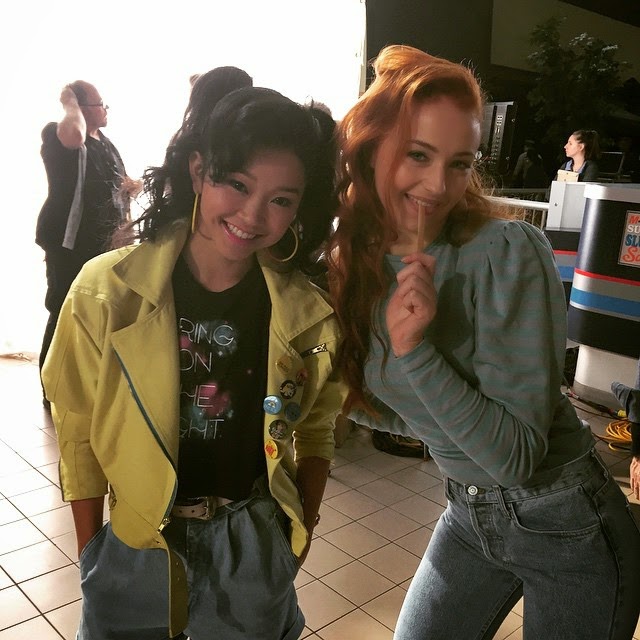 X-Men: Apocalypse is filming and some promo shots are whetting appetites, reminding us of another big Marvel film on the horizon not done by Marvel. Looks good to me!

The Other Franchise – okay, Fantastic Four has a newer trailer and I am more interested in the film now than before but I still want to see if the film is really going to be that bad. I feel that it might be okay despite changing a bunch of things from the comic. Arrow, Flash and Gotham rock – So Gotham is done for the season and everyone has gone crazy. Looks like we will see more of the Bat Cave next season and more development for the Riddler and Catwoman is in the cards. I will repeat myself again and say that I have trouble enjoying prequels. I feel that we need a pay-off of seeing these characters come into their own and in the case of Bruce Wayne, the series might have to go on for years and years. I guess they could recast Bruce Wayne and fast forward 10 years or so – that might be kind of cool and do that again the following season. 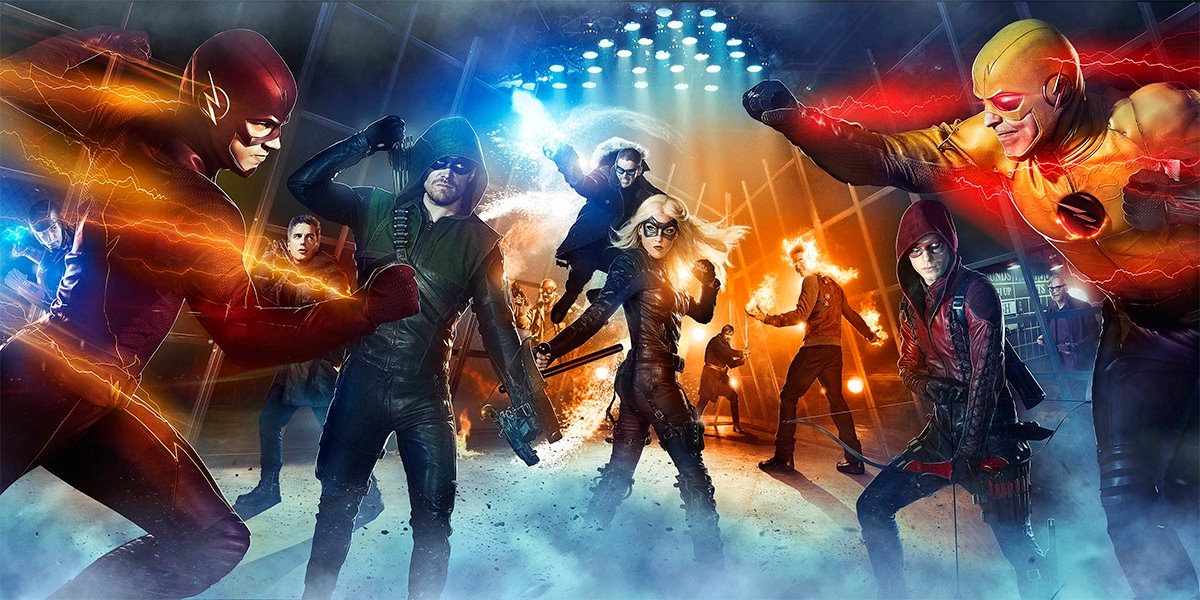 Speaking of Flash, this show is dealing with time travel, which is tricky, but it has been highly enjoyable to say the least. Arrow has also been incredible as well. Good to see these shows will be returning with the spin-off next season.


The Death of Superman Lives: What Happened? This documentary is out in limited theaters this month and home video on July 9.  It looks fascinating and from what I have seen, the movie, Superman Lives was probably going to suck completely.  I don't understand how anyone sees what this film was going to look like and think it looks incredible and yet criticizes the new Fantastic Four movie.

It is sad to see how close these movies get to being produced because despite looking horrible, we can't make that call.  We will never know for sure.  Like Jodorowsky's Dune the expectations might have been high and I would have loved to see how bad this film might have been.  Perhaps I will change my mind when I see this documentary but I doubt it. 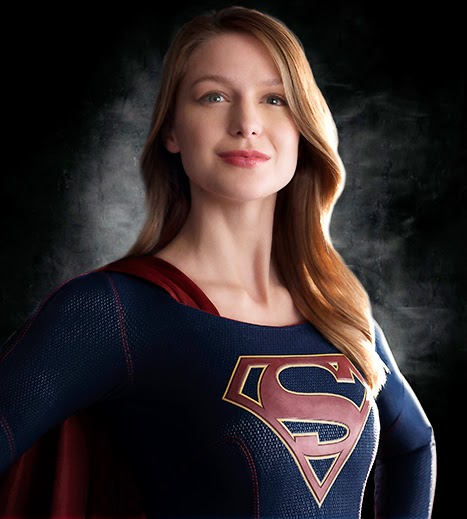 Supergirl Lives! CBS has given the green light to the Supergirl series.  I think this was a given already but now it is official.  Greg Berlanti (Arrow, Flash) is excellent with DC characters on television and so I am looking forward to this.  It might be good to see a series with action that takes place during the day for a change.  Doubtful this show would crossover with CW's shows but we can only hope.

Marvel and Female Superheroes - in two unrelated news pieces we see how Marvel is not perfect in dealing with their movie franchises.  First off is the leaked e-mail from the Sony and Marvel CEOs that criticized female superheroes in movies. In the email there are examples of 3 superhero movies with female leads that failed at the box office.  Really?  What about all the male superhero films that failed?  Anyhow, this embarrassing e-mail has been made public and coincidentally (or not) there does appear to be a move to get female heroes into the Marvel fold with Captain Marvel planned for 2018 and rumors of a Black Widow stand alone being considered.

Hopefully the female hero films do well but Marvel is still not sold on it, at least with the merchandising. Even Clark Gregg (Agent Coulson) has commented on this. And consumers are mad.

Well, let's hope this changes.  The audiences for these types of movies are 40% female.  I think I read that somewhere. 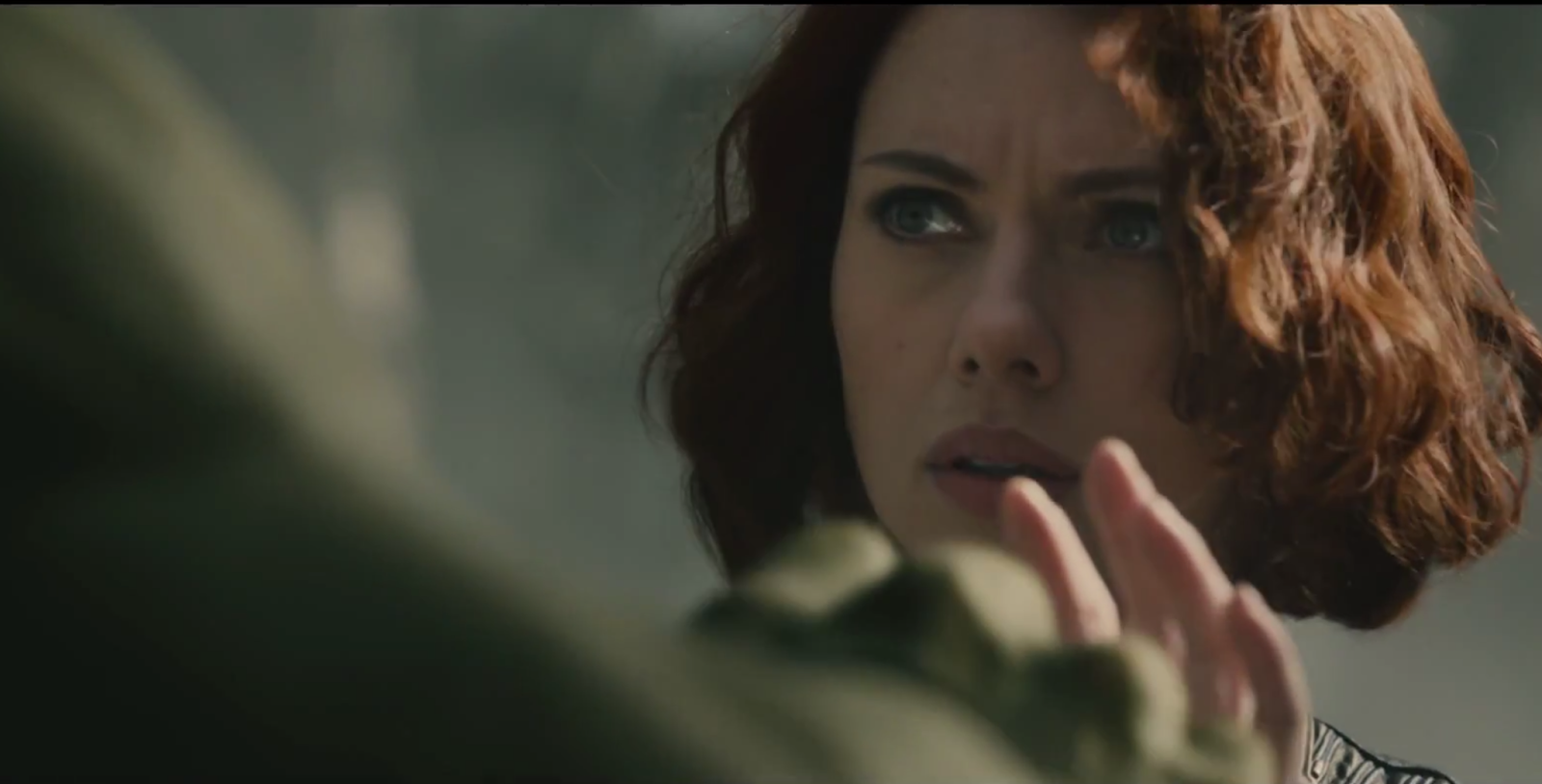 The other new piece is even more disturbing but probably less important is the problems with Black Widow in the latest Avengers film. A twitter battle has erupted over criticisms that Joss Whedon wrote Black Widow as a victim, kidnapped by Ultron and the fact that she sees herself as a monster because she was made sterile during her training. Despite this fact that she cannot have kids, she is auntie to Barton's kids, has to pick up after the Avengers (Cap's Shield in Avengers: Age of Ultron, and... get this... sings a lullaby to her 'baby', the Hulk).  WOW.  Really?

Couple this with co-star Jeremy Renner (Hawkeye) calling Black Widow a slut and you have people freaking out. Now some of this does seem to fit but I really think people are reading too much into it.  I think Black Widow has been very good in the film.  I don't know that much about the comic character but Scarlet is doing a fine job in my opinion and I would love to see a stand alone film with her.