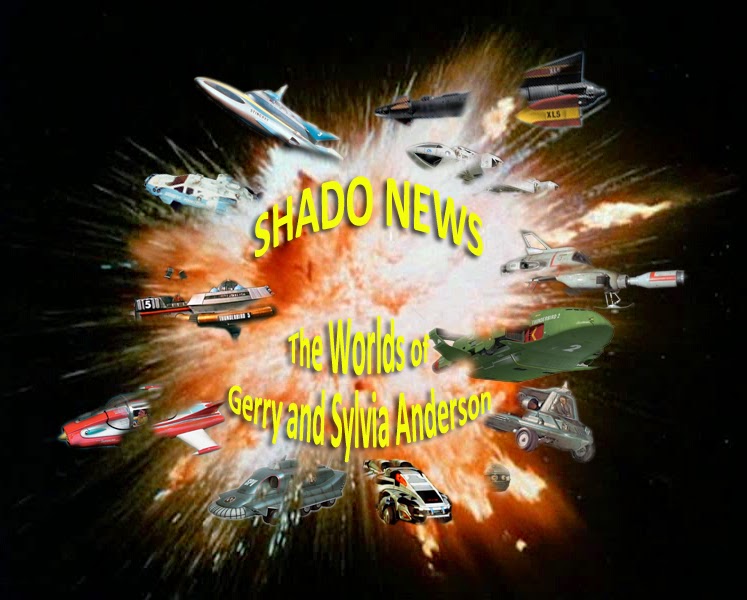 We have a few things going on in this wonderful world of Anderson including the ongoing Thunderbirds Are Go TV series, new stories from Terrahawks and the ending of the Space: 1999 book range.  Enjoy!


Thunderbirds Are Go TV Series – The remake series is currently airing in the Uk and a few other countries and has gotten excellent reviews from critics and fans alike. My own person view of the opening two episodes can be found here. 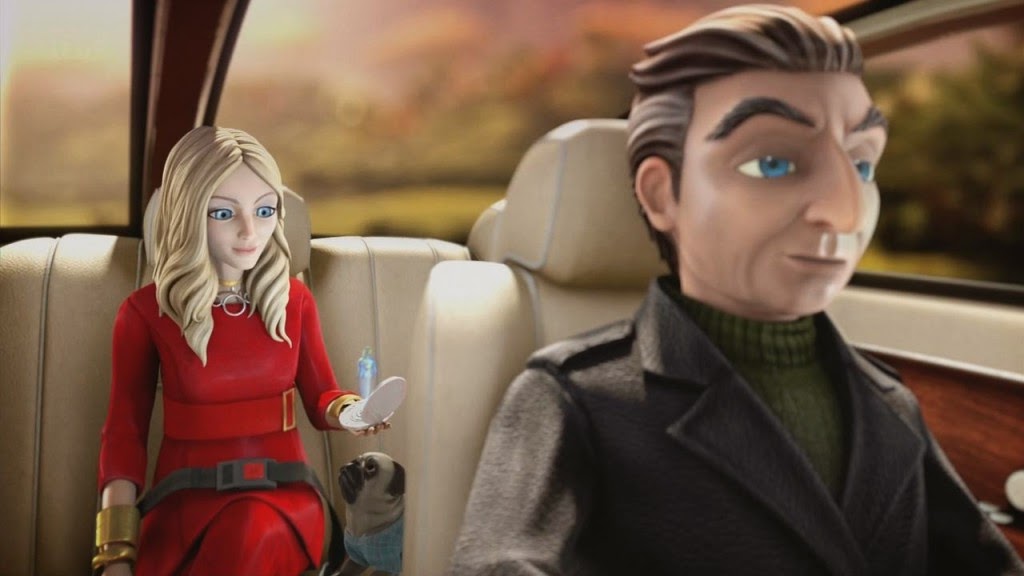 Since then a few more episodes have aired. “Space Race” (1x03) is an adventure that focuses on one mission and only a few of the characters, including Alan, John, Penelope and Parker. This is a good change of pace and seems to be more like what the rest of the series will be like. The story takes place mostly in space and shows off some good action. The Penelope and Parker bit sort of reminds us of that pairing in the original although Parker now seems to be more cool and less of a bumbling fool. 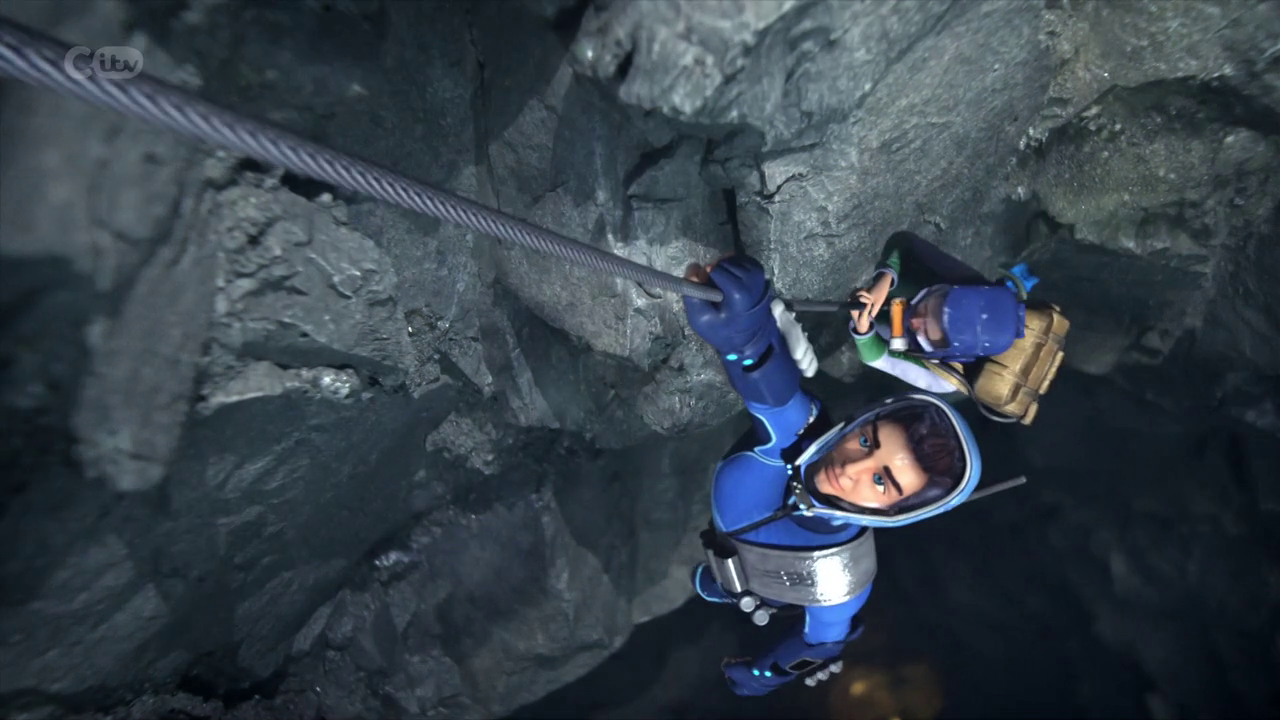 “Crosscut” (1x04) centers on Scott and his rescue and potential love interest in the future. The Hood makes his presence known again and I am concerned that the Hood will be too prominent in this series. He was not in many of the original series and I would love to see disasters that are naturally occurring or your run of the mill human error creation. 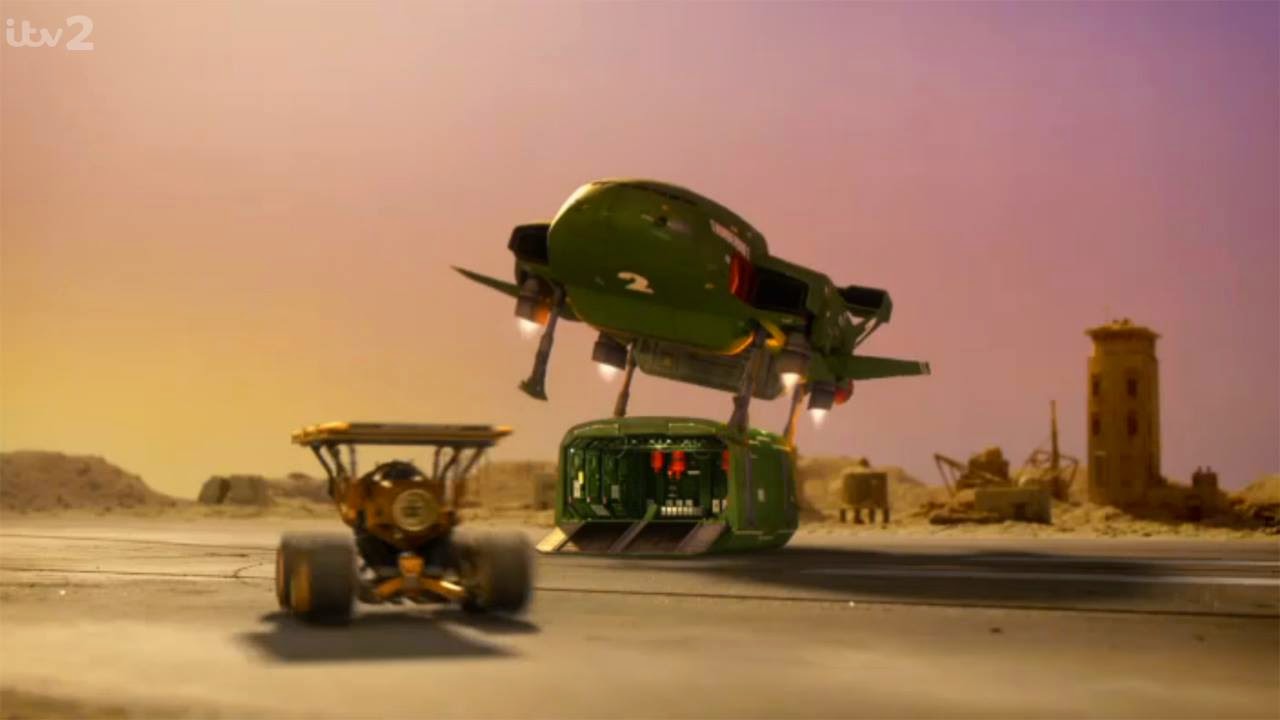 “Fireflash” (1x05) – This is kind of a remake of the original pilot story, “Trapped in the Sky” and for that, would have a lot to live up to. And it does a commendable job. The story yet again has the Hood up to no good but unluckily for him, Kayo, his niece and International Rescue security officer, is on board to thwart his plan. Unfortunately the plan is still going to crash unless I.R. Saves the day. The clever twist and overall tension in this one makes it the best of the new series so far.

I will say that I think Thunderbirds Are Go is excellent and the heart put into this series is incredible. But, I seem to remember being more excited for New Captain Scarlet in 2005. I still have to give it time of course and do expect Thunderbirds to get better. 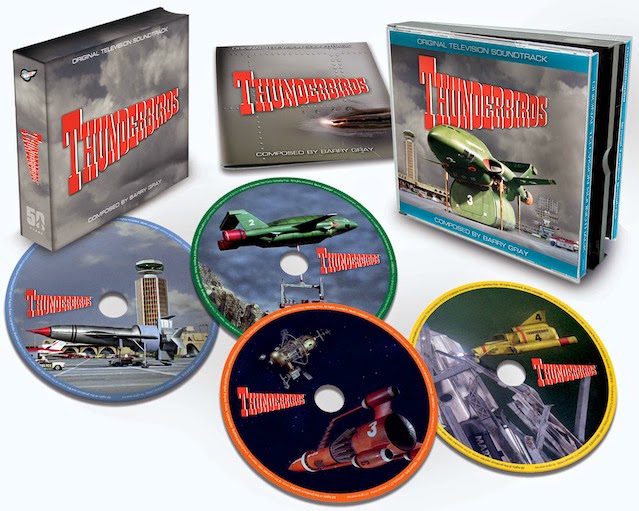 Thunderbirds Soundtrack – I am currently listening to the new Fanderson produced 4 disc Thunderbirds music CD featuring music from the original series. I love Barry Gray's music and his Thunderbirds music in near the top for most fans. It is an expensive set, couple that with a Fanderson membership and you could go broke. It is a limited edition and their publications and products are always top notch.

Fanderson is often criticized for its costs but their limited print runs and quality is well worth it in my opinion. They do produce a fine product.

Powys Media is ending – the company who has provided novelizations for Space: 1999 and The Prisoner is ending after 16 years. Powys Media tackled the Space: 1999 mythology with some excellent ideas and took a relatively canonless series and made it into one hell of an epic adventure. The books have made me both entertained and mad at the same time. Often the books seemed fannish to me by trying to push a canon onto the series and going out of its way to get rid of some of the original series less popular developments while bringing back some fan favorite characters from the dead. I had mixed feelings about this but looked forward to the books nevertheless. 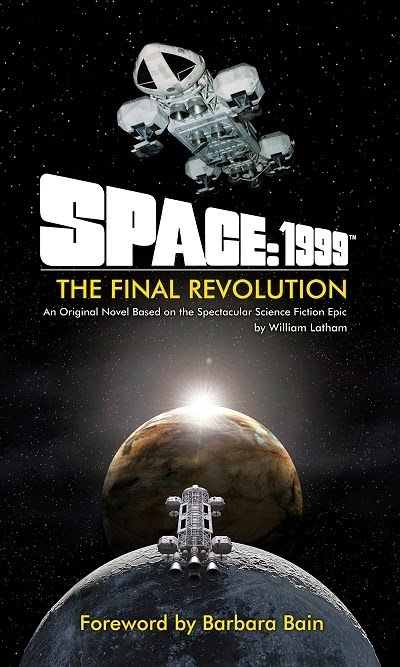 The aggravating release calender for the books was unbearable. A couple of fans running this company would do their best producing and writing but often the novels would take years to come out. At the current time writing this article, there are at least 6 books that were planned and have yet to come out. The company states that they are still planning on releasing them within a year before they close up shop but I can't imagine this. Then there is one novel that seemed to be within days of being released and that was canceled without explanation.

I wanted this series of books to do well but have also noticed that very little is talked about the series of books online. I know there is some interest but it seems to be very little. If anyone was thinking about getting on board before the company folds, now is the time. Many of the books are available at Amazon or Lulu. The company states that current stock will be available for 5 years or so and then the novels will go out of print. 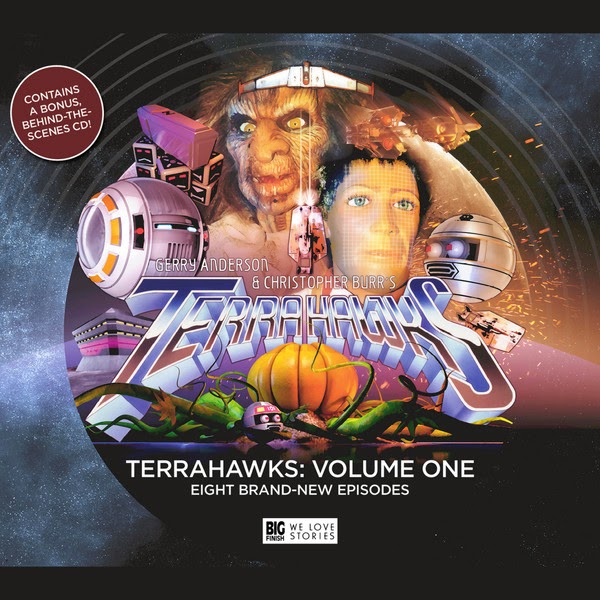 Terrahawks from Big Finish – At the same time the Thunderbirds Are Go TV series began airing in the UK, I received my digital download of the new Big Finish Terrahawks audio series. I have always found Terrahawks to be enjoyable and while I recognize its weaknesses in comparison to Gerry Anderson's earlier series like Thunderbirds and Captain Scarlet, I have always found it to be nearly as enjoyable as those heavy hitter companions.

In comparison to the new Thunderbirds Are Go series, I actually have found the Terrahawks audios to be more enjoyable and I am surprised by this. I am not a big fan of Big Finish. I enjoyed their Doctor Who range for a time but felt that their stories had a low point with no signs of a recovery. I also couldn't find time to listen to them as my commute to work is a mere 8 minutes. Perhaps one day I will go back and begin to listen to the years worth of adventures. 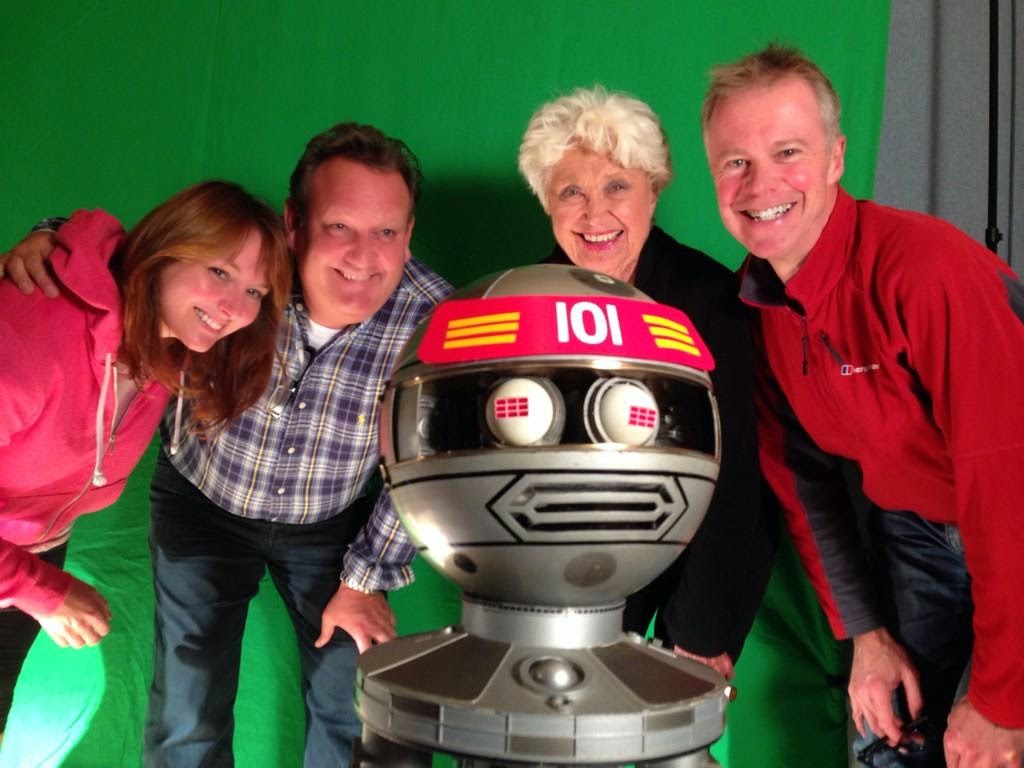 When Terrahawks was announced with the original voice cast and produced by Gerry's son, Jamie, I felt like giving the series a chance and I am glad I did.

Volume One is made up of 8 half hour or so stories.

I found these stories to be very enjoyable. They center on a script involving dialog and story and less on the action that was part of the original series. There are not as many battles with the Terrahawks craft and more about the characters. I found myself laughing out loud many times as I believe this audio series has done a great job recreating the humor that was present in the original. Terrahawks had a darkside that many people failed to see or remember and with the episode “A Clone of my Own”, that darkness is reached and surpassed. This story is amazing and such a contrast to the other humorous stories. In it Zelda is relentless in trying to kill the other Stein clones and Ninestein is uncaring in his confrontation with one of the clones – good stuff. Most of the titles are excellent ("No Laughing Matter" is the weakest of them all but I still found myself laughing a bit.) 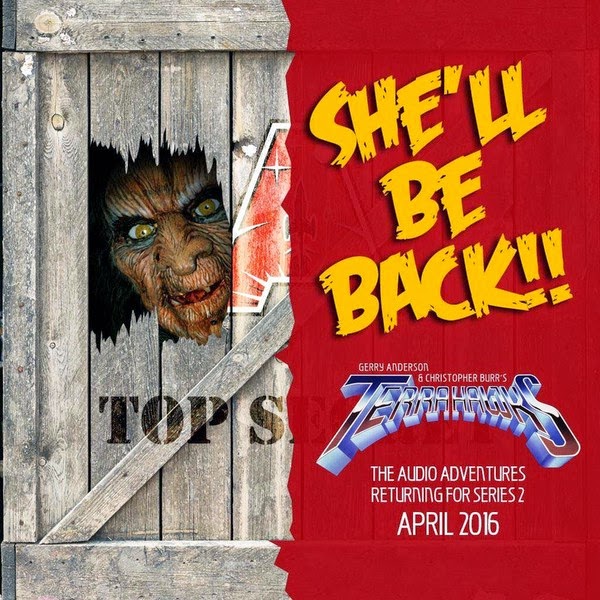 I did discover a few things while listening to this set.  First off, was Zeroid 101 always gay or is this new for the audio adventure.  Also, I remember thinking Ninestein was always such a grump but now I feel I can relate to him more than any other character in the series.  What's up with that?

The set also include a behind the scenes segment which is pretty cool and has interviews with the cast and crew.  This makes for a wonderful release AND..........

Terrahawks Second Volume is Go – This is great news, just as I finished the Terrahawks volume 1, hearing that the series will continue. The second set is planned for April 2016. I can't wait! 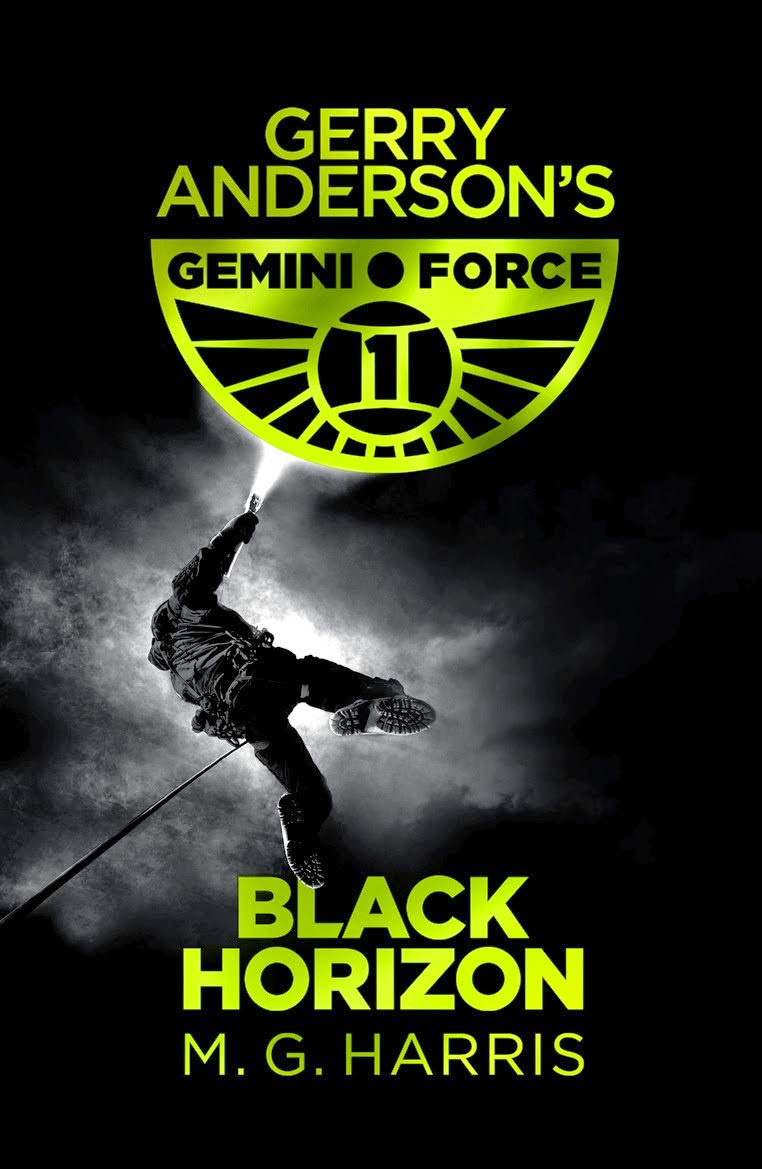 Gemini Force One – One of Gerry Anderson's never completed projects, Gemini Force One has been novelized and the book is excellent. In the vein of Thunderbirds, the Gemini Force One story is about a group of specialists rescuing people. They use futuristic technology to do this. The premise is very familiar but the book takes on its own identity fairly quickly. The first novel, “Black Horizons” is now available in paperback online. There are also some deleted chapters available for download.

New Captain Scarlet Woes – this series has got to be one of the most unlucky series ever. Not only did it take years to raise enough money to make, but it was released within a children's variety show with little fanfare. It really wasn't sold to a broad audience anywhere else in the world. The HD masters went missing for a time and now the bank owns the rights to the series. I feel real bad for this series and at the time Gerry Anderson was seeing this show fail miserably I remember reaching out to him through e-mail and on a radio show, asking him about the United States possibilities for a release. I later on contacted the owners of the licensing in the U.S. numerous times with no results. 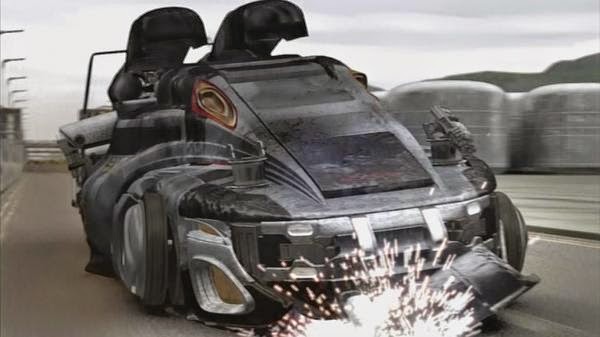 My hope is that Gerry's son, Jamie will somehow get the licensing back and release the series in HD. Perhaps the success of the Thunderbirds Are Go tv series will help this along.

Perhaps if they do get the rights back that an audio series of New Captain Scarlet can be done?  Maybe? 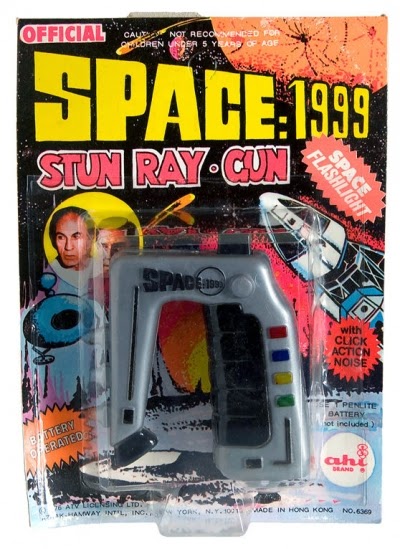 Merchandise Spotlight - One of the earliest toys I got from a Gerry Anderson production was this Space: 1999 Stun Ray Gun.  I think the price was $.99  and it was basically a battery operated toy gun that lit up.  A very simple toy but one that stayed with me everywhere I went.  I remember using it with my homemade costume for school, bringing it to the playground and acting as security guard during one of my family's tag sales (where unknown to me my Space:1999 lunch box was sold).  This toy was one of my favorites for sure.  It often broke and I managed to fix it, repaint it and so on.  In terms of accuracy there are 3 things that I became aware of over the years.  First off, it was slightly smaller than the original on the show.  My smaller hands at the time held it fine but a few years later, too small!  Secondly, the gun did neither stun nor kill anyone.  I guess this was a good thing.  Thirdly, the words Space: 1999 on the gun really assisted in killing the illusion that this was the real thing.

I had other stun guns that looked less 'real' and certainly there have been numerous models and replicas of accurate -ish versions but I don't have any of those.  I still have this one.  It is actually in my nightstand.  Not sure why.  It is in bad shape and really doesn't work any more but it served it's purpose.
Posted by SHADOKP at 2:00 AM