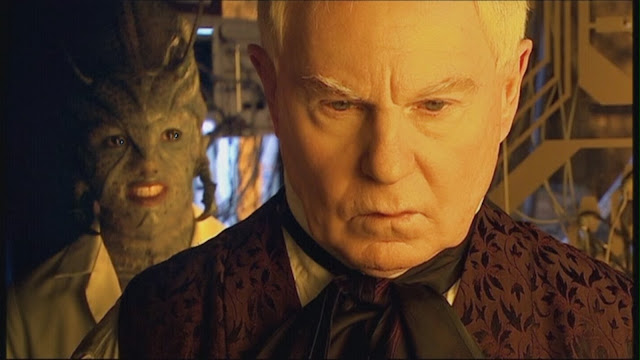 The Master returned eight years ago today. We look back at his NuWho return in Utopia.

The Doctor, Martha and Jack travel so far in the future that they literally have ended up towards the end of the universe.  They have gone so far that Time Lords never ventured there when they were still in existence.   The last humans are trying to get to Utopia with the help of a rocket ship that Professor Yana is trying to make lift off.

The Doctor offers his services and with the help with some power from the TARDIS the ship is ready to launch towards Utopia.  The Future Kind do not want the humans to leave for Utopia because then there would not be any humans for them to eat anymore and they are hungry.  So they have an agent that is trying to sabotage the launch.   The Doctor and Jack fix that problem but have encountered another when Martha informs The Doctor that Yana has a watch just like he does and she suspects he is another Time Lord.  She is correct in her guess but unfortunately for them that Time Lord happens to be The Master who is now reborn to wreak havoc on the universe once again. 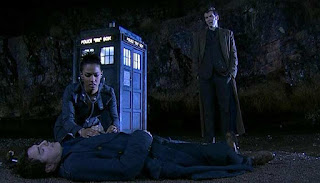 What a great way to bring back The Master.  By using the same techniques that was introduced in Human Nature with the pocket watch and incorporate it with The Master was brilliant.  Then having him get shot by Chant Tho and making him regenerate into John Simm was superb and really exciting at the time it was broadcast.  The last 10 minutes of Utopia when The Doctor realizes that Professor Yana is really a Time Lord but in fact one of the most dangerous Time Lords was really intense and exciting. You had an inkling that something was going to happen with Professor Yana as he kept hearing, in his head, the beating of drums.  Plus to spice things up Yana is the abbreviation for “You Are Not Alone” the final message that the Face of Boe gave the Doctor back on New Earth in the story Gridlock. 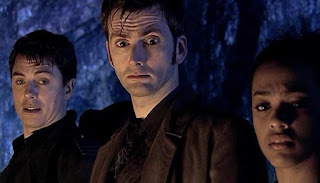 Utopia also sees the return of Captain Jack to Doctor Who.  Last seen in The Parting of the Ways and Series One of Torchwood we see Captain Jack hitch a ride on the TARDIS and travel all the way back to the end of the universe. That scene was pretty cool and would have been even cooler if they put Jack on the TARDIS during the opening credits. That would have been so cool to see that with Jack on the TARDIS with all the names and titles flashing on the screen and seeing Jack hanging on for dear life. 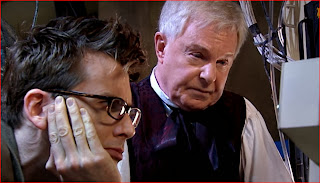 Derek Jacobi was excellent in his dual role in Utopia.  First he played Professor Yana.  Professor Yana is a scientist trying to get the last remnants of the human race to Utopia in a huge rocket ship.  This was the identity that we learned he made for himself to escape the Time War.  The best part of his portrayal was when he started to remember certain things that were triggered by The Doctor and the TARDIS.   Yana becoming all confused and when Martha gives him the idea of opening the watch and he does and hears all the past Master voices his performance excelled and he became really evil.  You actually believed he was the Master and it was too bad we didn’t get to see Derek Jacobi as The Master for longer than 5 minutes as his performance was really good and he would have made a really good Master. 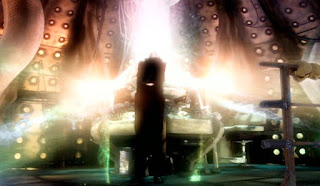 The story was pretty good also and is seen as a sort of prequel for the two part series three finale.  Unlike the last two story elevens in series one and two the Utopia breaks that mold as it was a pretty entertaining story.  You had the rocket trying to take off, the future kind trying to get into the base to keep their food source on the planet and the whole back story of the return of The Master.  Russell T. Davies gave us a good blend of comedic and dramatic intervals to keep this story pretty strong and interesting.  Utopia was pretty good and one I like to watch from time to time because the interaction between The Doctor and Jack and the explanation for why he left him back at the end of The Parting of the Ways.  Plus it was directed by Graham Harper and there is always a good mix of action when he is directing a story.  Utopia is a fun story that sets up everything nicely for the Series 3 Finale and was a great way to bring back an old adversary.
Grade B