Doctor Who - Celebrating 10 Years of NuWho: The Christmas Invasion Review 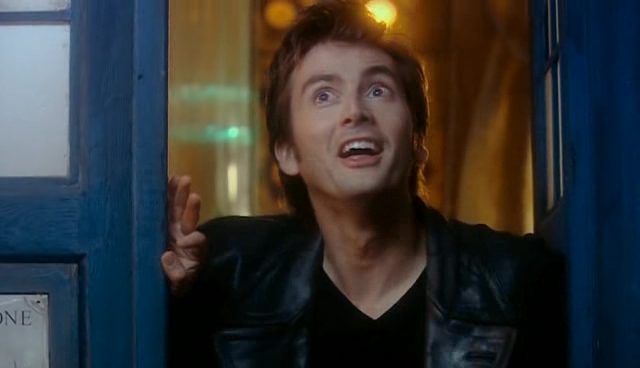 Finishing up our 10 year anniversary with The Christmas Invasion.  Last week we said goodbye to Christopher Eccleston and this week we say hello to David Tennant.

Doctor Who:
The Christmas Invasion
By Russell T. Davies

The TARDIS literally falls from the sky and crash lands next to Jackie and Mickey.  Out through the doors appears a confused and somewhat disorientated man.  The man wishes them a Merry Christmas and promptly faints.  Rose exits the TARDIS and tells them that this man indeed the Doctor, a recently regenerated Doctor.  After putting The Doctor to bed and making sure both his heartbeats are all right Rose and Mickey go to town and do some Christmas shopping.  Their presence is soon discovered and they are set to be attacked by four killer Santa’s.  The Santa’s use their musical instruments to cause distruction to the shopping area and Mickey and Rose make a close escape. As soon as they get back to Jackie’s apartment Rose is astonished to see a new Christmas tree.  Not as astonished as she is when the tree suddenly comes alive and tries to kill them.  Rose is able to get The Doctor awake just in a nick of time as he uses his sonic screw driver to destroy it and they discover there is a bigger threat before The Doctor slips back into a coma. 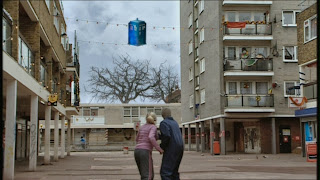 All this alien activity isn’t going unnoticed as UNIT and Prime Minister Harriot Jones are about to encounter the threat from space.  The Sycorax apparently have captured British unmanned space vehicle Guinevere One to communicate with British officials and to launch their invasion of Earth.  On board Guinevere One is a sample of blood in which the Sycorax use to hold 1/3 of Earths population hostage and under their control and in doing so have them on the roof of buildings awaiting a command to jump if their demands are not met.  It’s up to Rose to figure something out until The Doctor awakes from his slumber to save Earth once again. 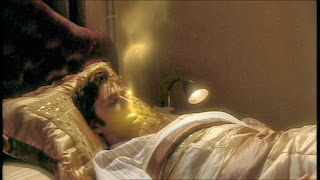 “The Christmas Invasion” is the first full story to feature David Tennant as The Doctor and is the first of the Christmas Specials that has been a staple of the new series.  Sure we have seen snippets of him at the end of “The Parting of the Ways” and the Children in Need short but this time we get a full hour of the new Doctor.  Well sort of.  Unfortunately David Tennant spends most of the episode dreaming of sugarplums dancing in his head.  It isn’t until the last 15 to 20 minutes that we get to see the full Doctor effect in this story.  Sure we get that little snippet at the beginning and during the Christmas Tree attack but it really isn’t until the final quarter of the episode that we get a glimpse of what this new Doctor would be like. 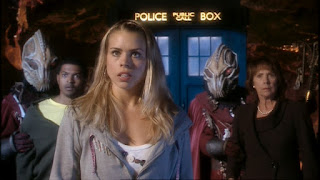 Billie Piper does her customary good job with Rose this time around.  She brings to this story a lot of confusion and a broken heart but at the end she is totally approving of the new Doctor.  During “The Christmas Invasion” Rose is sadden that her Doctor is gone and replaced by this new Doctor.  She has her doubts about this new guy and with good reason as it is taking him forever to recover from his post regeneration crisis. 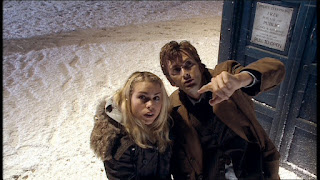 “The Christmas Invasion” does have some problems with the plot as there are certain elements that aren’t explained in depth.  Like the mystery surrounding the Santa’s. Like how did they know The Doctor would return to that point in time?  How did they know about Rose, Mickey and Jackie?  Are they really working for the Sycorax or are they working for someone else?  I guess we do find out the following Christmas or do we really or is it just something RTD thought would be great to do and didn’t plan on discussing it further.  Just like most of his stories RTD just doesn’t explain in depth what is going on as he  leaves plot lines hanging and unresolved.  We never do find out why or how these robots knew about The Doctor or the true reason the Sycorax wanted The Doctor.  Typical RTD but at least the rest of The Christmas Invasion is entertaining. 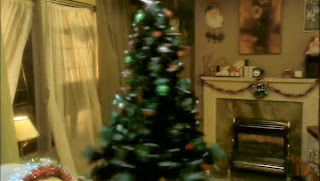 My favorite moment from “The Christmas Invasion” is watching the killer Christmas Tree.  The Christmas music of Jingle Bells really makes the scene and makes it hilarious.  It is just a funny scene that works really well in this story.  Another classic moment is onboard the Sycorax ship when the TARDIS telepathic circuit translate the Sycorax language to English and everyone looks back at the TARDIS and the new Doctor has arrived all healed from his regeneration ready to save the day.  Just thought the Doctor losing his hand was a bit stupid but we know where that goes in the future.  A good start for the 10th Doctor even if the story was just an average and not anything really spectacular.
Grade B