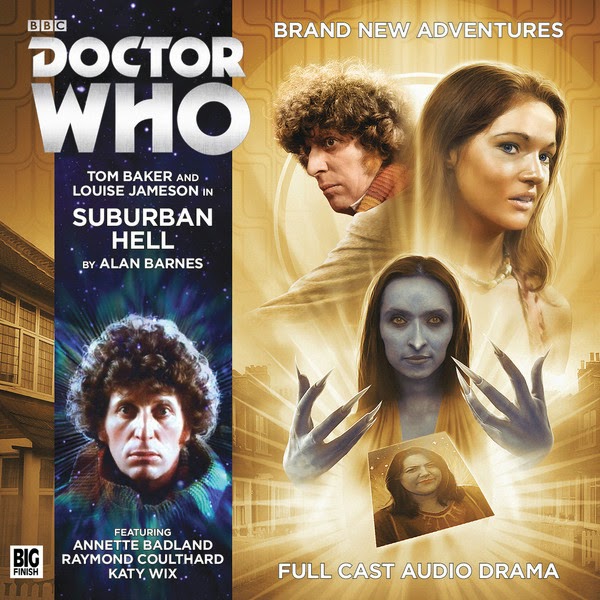 Ralph and Belinda are expecting four for supper when there was an unexpected knock on the door. At the door is The Doctor and Leela and they are mistaken for the dinner guests.  The Doctor and Leela are stranded as the TARDIS has disappeared because of a temporal ruckage. The Doctor explains that the TARDIS is really on the other side of a wrinkle in time and it’s just a matter of finding a way to get it back.

Soon things don’t appear to be going well for the dinner party.  A fog starts rolling in and inside that fog are monsters that seem to have a taste for humans.  Plus The Doctor seems to have disappeared.  Leela can’t find him anywhere.  Where he ends up is not where he was expecting.  The Doctor finds himself back in time and discovers what the big secret that the house has been hiding all this time.

Suburban Hell was a pretty good story that was slightly different as it had a bit of timey wimy to it.   I like stories that are a little bit weird and use time disturbances in it.  In this case The Doctor goes back 40 years and learns what happens in the house that causes what happens in present day.   I liked this part of the story as The Doctor is more or less playing detective and puts the pieces together.  Plus I also liked how the alien being was there with him in a way narrating the story.  I like when Big Finish does this as they are pretty clever not to be clever and back themselves into a corner and then rush the ending.  The back and forth of the narrative going back and forth from the past to the present gave us a pretty good picture of what was going on and what will happen next.

Suburban Hell was a really fun story to listen to and for fans of NuWho you will hear a familiar voice.  Annette Badland plays Thelma and most of you will remember her from the Christopher Eccleston era as Margaret Slythen from Boomtown and Aliens in London/World War Three.  I had to read the credits as she did not sound familiar at first but as the story went along she did sound familiar.   As stories go this one was pretty entertaining and worth the time to listen to as a download or CD.  Suburban Hell is truly a fun hour of Doctor Who.
Grade B +