Doctor Who - The Defectors Review 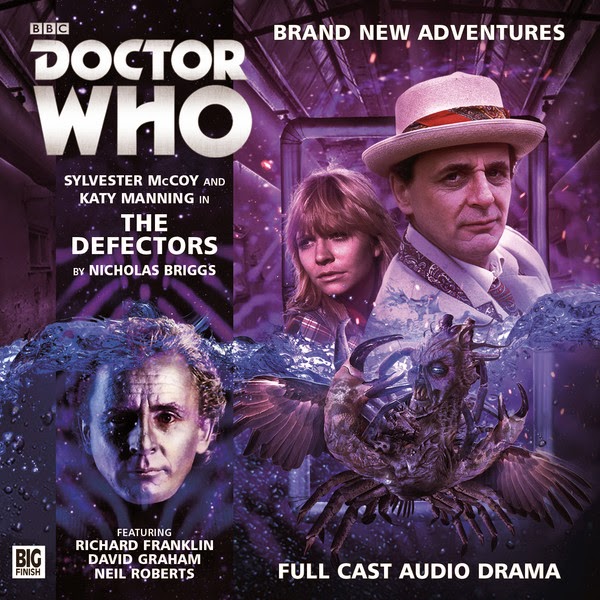 Doctor Who:
The Defectors
By Nicholas Briggs
Starring Sylvester McCoy and
Katy Manning

UNIT headquarters is being evacuated and Jo is shocked to find that most of her friends are gone already.  This was all sudden and she is very suspicious of the British army officers that are in charge of evacuating UNIT and starts to investigate what is really going on.  This obviously gets Jo in trouble and she is soon captured by the aliens posing as British officers.  Their true motive has to do with The Doctor and Jo doesn’t know where he is at the moment.  Then they hear the familiar sounds of the TARDIS returning but what they see is something else entirely.  The 7th Doctor has arrived and Jo isn’t all that sure of this version of The Doctor and is forced to trust him to save the Earth and hopes he can return her Doctor to them.

When I first heard of this pairing for Big Finish’s march to their 200th main range release I was pretty intrigued as it seemed like it would work really well.  But to me it seemed like a wasted opportunity.   Jo spent most of the story not trusting The Doctor and didn’t even acknowledge him as The Doctor until the end. For someone who had encountered two other Doctor’s before you would have thought she would have been more trusting.  But then again she does know The Master so she does have the right to be weary but she was just too cautious in this story.   It would have been better if they acted like Doctor and companion more than during the last part as there was some good moments between the two.

The chemistry between Sylvester McCoy and Katy Manning was pretty good.  It was like they were Doctor and companion for years.  I’m sure they will pair these two up again as it worked really well.  If they do I hope they let them bounce of each other more and have Jo be more trusting of him.  But considering what happened at the end of the story that might be a bit unlikely.

I did not really care for the story all that much.  The Defectors was another alien hidden on Earth story that just seemed to have fallen flat.  Yes it did have the awesome meetup of Jo Grant and the 7th Doctor but the story surrounding it did not do much for me.  It was trying to feel like a UNIT story of the 70’s but it just did not feel like one for me. I’m hoping that the stories for the 3rd Doctor Box set will be more like the ones from the Pertwee era.  The Defectors as a story the plot has been done better and Nick Briggs has done better also.  Not saying the story was bad but it just did not fit the era.  Now it did fit the 7th Doctor era better but that was not the era I was hoping for.  The story also had Jo do something that was so not like Jo.   It was kind of hard to hear her doing that but she did it with the Doctor’s welfare in mind so you couldn’t really be mad at her.  But still it wasn’t like the Jo we know from TV.

In all The Defectors was an average story that wasn’t what I was expecting.  But if you are a fan of Jo Grant and the 7th Doctor you might enjoy this story but be warned it isn’t like a story from the 70’s even if Mike Yates does come to the rescue at the end.
Grade C +