Doctor Who - Synopsis For Short Trips: The Shadows of Serenity 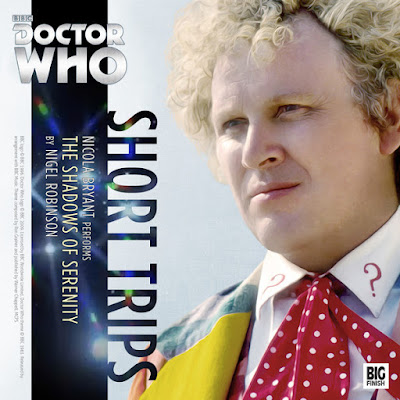 This months download only audio adventure features the 6th Doctor.  Nicola Bryant narrates this story about The Doctor and the mystery of the Sisters of Serenity.  You can order this from the Big Finish website.
http://www.bigfinish.com/releases/v/the-shadows-of-serenity-1099


The Guns of Malgar once defended their planetoid from any who strayed too close; just one gun could obliterate an entire star fleet.

The Malgarians are known as a vicious, belligerent species - so when the TARDIS brings the Doctor and Peri to their homeworld, they are puzzled to be greeted by a pacifistic population.

Peri assumes the Doctor has just got his facts wrong, but he is reluctant to accept the Malgarians’ uncharacteristic behaviour. What lies behind it, and what is the secret of the Sisters of Serenity?

Cast
Nicola Bryant (Narrator)
Posted by DR5WHO at 8:27 AM