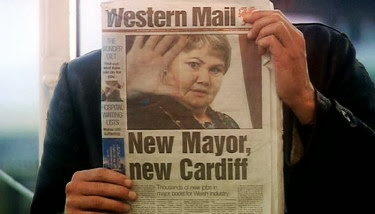 “It's not just any old power source. It's the Tardis. My Tardis. The best ship in the universe.”

The Doctor, Rose Jack and Mickey are enjoying a quiet time out in Cardiff while waiting for the TARDIS to refuel at the rift.  Everything is going good until The Doctor notices the front page of the local newspaper.  To his dismay he sees the face of a familiar foe thought to be dead when Downing Street exploded from a missile.  Margaret the Slitheen is alive and to make matters worse she is the mayor of Cardiff.

So the four travelers head out to find Margaret and to stop her from building a nuclear power plant that would fail and blow up the city to allow her to escape using an extrapolator.   But the thing is once they have her they need to wait before they take her back to Raxacoricofallapatorius they have to wait for the TARDIS to finish refueling and in that time anything could happen to allow Margaret to escape. 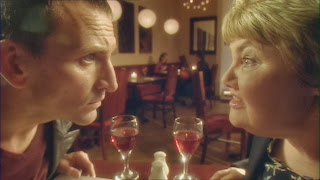 Boom Town is not bad for a throw away episode.  As fillers go it is quite entertaining and also very light hearted with a bit of humor.  We get to see the comical side of Christopher Eccelston as he and Annette Badland have great chemistry in the last dinner scene.   That is the highlight for me as it starts of silly but then it gets serious as Margaret is trying to bargain for her life and we see The Doctor being cold and having nothing to do about it.  This is another different side of The Doctor the cold uncaring one that must have been a result of the Time War.  As we see later on he changes his mind when the TARDIS consul is open and he allows Margaret to get a second chance after all. Which is absolutely brilliant as The Doctor breaks the rules of time again and allows Margaret to revert back to an egg to begin life again thus allowing her a second chance.  Makes you wonder if he was really going to bring her back to Raxacoricofallapatorius and face execution. 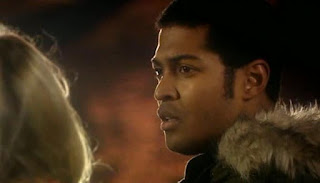 We also get another side of Rose one that isn’t much of a surprise as we have seen it many times before and many times since.  The selfish Rose makes an appearance in this story as she tries to have it both ways.  She wants a relationship with Mickey but she also wants to have fun adventuring with The Doctor.  What she doesn’t understand is that she can’t have both.  We see Mickey tell her off that she isn’t around anymore and that he has moved on.  It is very obvious that Mickey isn’t happy as we see when they are hanging out as a group that he is the third wheel and not really having a good time. We also see Rose having some remorse until the earthquake happens and she immediately dumps Mickey and runs to the TARDIS.  Rose is selfish and only thinks about herself and not others and we see that really well in Boom Town. 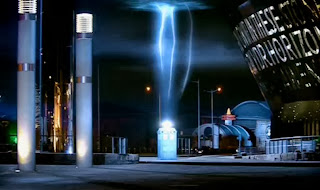 Before people start calling for my head.  Well mainly the Rose lovers if you read Russell T. Davies book and the character description of Rose that is exactly what she is.   We see it more in the Tennant era but this story really brings it out front and center.  Rose is not really a nice person.  Her heart might be in the right place but her mind and how she treats others isn’t.

Boom Town will not go down in history as one of the greatest stories of all time but it will not be one of the worst.  It is a fun episode that is light hearted and entertaining and really captures the heart and feel of the 9th Doctor era without getting bogged down in a complicated story.  Ten years on it still works and as filler story it is one of the better ones in NuWho.
Grade B