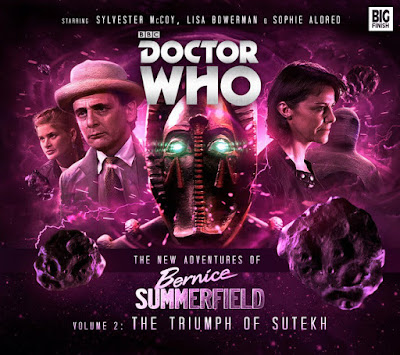 Out now is Doctor Who: The New Adventures of Bernice Summerfield Volume 02: The Triumph of Sutekh.  Here we see Benny uncovering a pyramid on Mars and someone we  thought was long gone has come back from the dead. Hopefully The Doctor and Ace can help save the day.  This box set is available to buy and you can order it from the Big Finish website.
http://www.bigfinish.com/releases/v/the-new-adventures-of-bernice-summerfield-volume-02-the-triumph-of-sutekh-1199?range=94

1) The Pyramid of Sutekh by Guy Adams

2) The Vaults of Osiris by Justin Richards

3) The Eye of Horus by James Goss

4) The Tears of Isis by Una McCormack

Russell Courtland prophesied the world would end on Tuesday. No-one was more surprised than he was when it did.