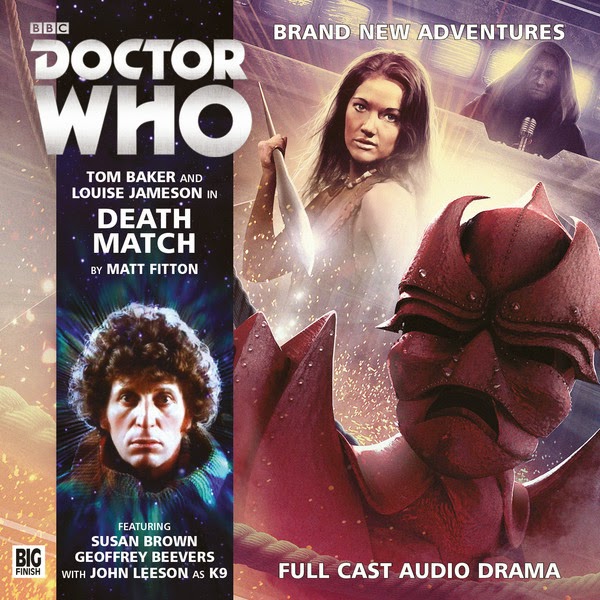 The Doctor gets a message from Marshall that Leela has suddenly disappeared.  He says she never returned from saying goodbye to The Doctor and there is no trace of her anywhere.  The Doctor soon finds a trace of her and it appears to be must troubling where she might be.  The particular place is the home to the Death Match.  The Death Match is under new management and The Doctor knows exactly who the new owner is.  The Master has taken over operating the Death Match and his champion is none other than Leela.

Death Match is Doctor Who meets The Hunger Games without all the pageantry and the over the top TV presenter.   Leela is in the games and must kill her adversaries to survive.   She has done this many times and has one adversary The Red Knight.  For most of the story we see Leela running and fighting The Red Knight while The Doctor and K – 9 try and stop The Master from hatching out his plan.  Death Match is a very simple story but a whole lot more entertaining than the previous story Requiem for the Rocket Men.

Even though the ending is predictable with Marshall’s death and Leela rejoining The Doctor in the TARDIS the way it happens makes sense for the story.  With Marshall sacrificing himself so Leela can defeat the Red Knight it gives us more development into the Big Finish Leela that we never saw on TV.  We see a Leela with more feelings and emotion and that she really had feelings for Marshall and his death really does affect her at the end of this story.  Whether or not they build on this or not it is something of a change than the normal savage Leela.