Doctor Who - Pyramids of Mars Review 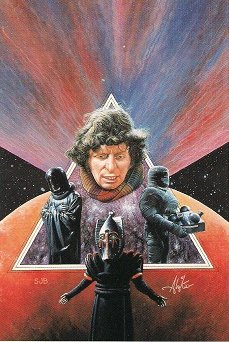 The Pyramids of Mars aired 40 years ago from October 25 to November 15.  See what we thought about this classic Doctor Who Adventure from 1975.

Doctor Who:
Pyramids of Mars
By Stephen Harris

“The forces that are being summoned into corporeal existence in that house are more powerful and more dangerous than anything even I have ever encountered.”

The Doctor and Sarah are attempting to return to Earth and UNIT headquarters when they land at the exact spot but in 1911 way before UNIT occupy the house its HQ is in.  Something throws the TARDIS off course which contributes to arriving at the wrong time. They discover an Egyptian is living in the house that belongs to Marcus Scarman.  It appears that the sarcophagus in the house is the unit that made the TARDIS veer off course.

It appears the sarcophagus is a time tunnel connecting Scarmans house with Suteks tomb in Egypt. Sutek is using Scarman to build a space missile that would destroy the pyramids on Mars and thus releasing him from his prison.  This would allow Sutek to take over the world and destroy it and destroy everything in the universe.  It’s up to The Doctor and Sarah to prevent this from happening and to stop Sutek from getting free at all costs. 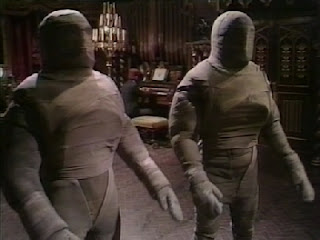 The Pyramids of Mars is one of those all-time classic Doctor Who stories.  Don’t take my word for it ask any fan of Doctor Who who loves the classic stories from the past.  What makes Pyramids of Mars so enjoyable is how well Sarah and The Doctor get along.  Plus they have some wonderful dialog between them. Most of it pretty funny in a serious way that only the two of them could pull off.  Yes the Doctor gets cranky with her at times but the rapport they have is something special.  Elizabeth Sladen is just amazing in this story and for once she does more than just getting captured and waiting to be rescued.  She at times becomes very important and we learn that she has a top notch eye when firing a rifle. 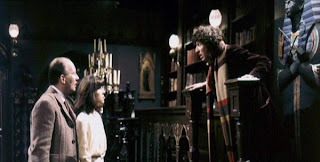 I would be remiss if I didn’t mention Sutek and the robotic mummies that inhabit this story.  One of the few times that Doctor Who uses Egyptian Mythology in the show and fusing it with Mars works to make the mythology highly enjoyable in a sci- fi way.   I mean these mummies look awesome and menacing.  I was in awe of them as a kid and still find them cool today.  They are truly an awesome part of Doctor Who’s history.  I love how the Osirins are based on Mars.  Trapping Sutek in a pyramid in Egypt really builds to the mythos of the mythology.  Plus having them based on Mars where Sutek couldn’t reach them was pretty clever and adds to the story especially when The Doctor and Sarah head to Mars and face the traps and puzzles of the Osirins. 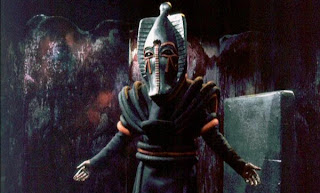 Pyramid of Mars is one of those stories that is perfect in so many ways.  Great performances, great story and great execution make it one of the true classics in Doctor Who’s history.  Plus the music is perfect in this. It adds to the atmosphere and really sets a tone of doom and despair.  All you have to do is watch The Pyramids of Mars for yourself and you will see how wonderful a story it is.  Pyramids of Mars is just one of those stories in which Tom Baker just excels as The Doctor.  He is in top form and puts in one of his finest performances ever.  He truly has found his groove by this time and he truly is The Doctor.  Watching Pyramids of Mars you can truly see why many consider him the greatest Doctor ever.
Grade A